Stourbridge FC play one of their most important fixtures this Saturday at home against Walsall in the first round of the FA Cup. It will be the one of club's biggest games in their 133 year long history.

"The Glassboys" were founded in 1876 and were originally known as Stourbridge Standard. Top honours eluded the club until the 1887/88 season when they won the Kidderminster Cup and the Worcester Charity Cup.

After the Second World War, "The Glassboys" (reflecting the town's connection with the Cut Glass industry) enjoyed their greatest period of success in non-league football, as they carried off the Birmingham Combination Championship in 1952 and also won the Birmingham, Worcestershire and Herefordshire Senior Cup's too during this particular era.

In 1973/74 the club had a tremendous run in the Welsh Cup, disposing of both Swansea and Wrexham on the way before facing Cardiff in a two-leg final. A record crowd of 5,726 saw them lose the home leg 1-0, followed by a 1-0 defeat at Ninian Park.

The club now play in the Southern League Premier Division . Their home ground is shared with Stourbridge Cricket Club, with the first team pitch forming part of the cricket club's outfield. 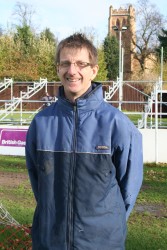 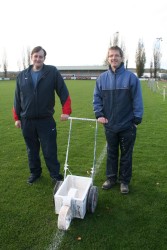 The club's new Chairman is Ian Pilkington, who has been associated with the club for well over thirty years. Ian came to the club back in the early 1970s as a supporter and, over the years, has held many volunteer posts within the club. He is also the current Head Groundsman, a role he has held for five years. Ian has an assistant, Mark Wiley.

The pitch is soil-based, overlaying a sandstone sub base, enabling it to drain quite freely. The club also share the ground with Causeway United, another local team, and the Stourbridge youth academy team. Also the club train on the pitch every Thursday evening.

On average Ian has to accommodate three matches a week throughout the playing season, which usually totals usually around 65 games. Having floodlights enable games to be played mid week.

This heavy fixture list reduces the time Ian can work on the pitch between games. It is usually a case of putting the worst divots back and hoping to find the time to mow and mark out for the next game. Not easy when both Ian and his assistant hold down full time careers outside the football club.

The equipment is fairly basic although they have recently replaced their old Dennis 36 mower with a 'nearly new' Ransomes Mastiff 36. They also have access to a ride on rotary mower. Ian marks the pitch using a transfer wheel line marker, usually twice a week throughout the season. Ian has also acquired a slitter to keep the pitch aerated on a monthly basis.

Having to share the ground with the cricket club does cause a few issues, one being that they have to play away from home for at least three matches at the start of the season, due to the pitch still being used for cricket. They have an arrangement with Halesowen Town to use their pitch.

The club invest around six and half thousand pounds for materials and servicing of equipment for pitch maintenance with the bulk of it used for seed and end of season renovations.

The club had to win four previous qualifying rounds to get into the 1st round of the FA cup. Once they had achieved this Ian and his colleagues had to present the facilities to a panel of inspectors from the FA, police, fire brigade, Walsall FC and local council officers to ensure that they met the stringent requirements for access, crowd control and appropriate facilities to stage this game. The game will be featured on ITV's highlights show and their requirements also had to be met.

After a long day of meetings on Tuesday 27th October the club were finally given the go ahead to stage the match, with a restricted a gate of 2,000, on Saturday 7th November, leaving little more than ten days to arrange all the necessary works to be done to comply with the sanctioning of the match.

I am sure it is going to be a busy week for the club trying to get the club ready for the biggest game in their history. The club have had to arrange for a 400 seater temporary stand to be erected behind one of the goals, fencing to separate home and away fans, as well as stewards and police. The many commercial requirements, such as match day programmes, catering and bar staff, all require Ian's time along with trying to ensure the pitch will be at its best for the game.

The match has sold out with all 2,000 tickets snapped up within three days, bringing in a income of around £40,000. Along with bar profits and other commercial sales the match should realise a decent income. However, the cost of putting on the match will, no doubt, see much of that money spent.

Ian said that it's not that they expect to make much money, it the taking part and raising the profile of the club that is the key aim and, more importantly, making a good account of ourselves out on the pitch.

Ian is only too aware of the issues that require attending to in relation to pitch maintenance but is confident that, in his new roll, he will be able find resources and appropriate funding initiatives for the club to further improve the ground and playing surfaces. He has already identified that there needs to be closer working ties with the cricket club with, possibly, both clubs financing a full time professional groundsman to ensure both playing surfaces meet the standards.

By providing better quality surfaces, in conjunction with improvements to the pavilions, it will go a long way to attracting both players and spectators.

Winning the game on Saturday is a possibility, and who knows what may happen if they get in the next round and drawn a high profile club. That's the magic of the FA Cup.

I can't imagine there are many football club chairmen who have such an affinity with what is involved in preparing and maintaining a pitch week in and week out!