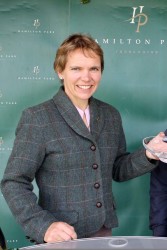 The phrase 'baptism of fire' hardly does justice to Hazel Peplinski's experience as Clerk of the Course at Ayr Racecourse, where she is on secondment from her regular role at Hamilton Racecourse.

On July 13 2009, she was shadowing departing Clerk, Katherine Self, at a busy summer meeting and, anxious to get a closer look at the course, headed for the home bend. There, she found herself at the centre of a major drama when a seven horse pile-up occurred as the field turned into the home straight.

"Despite media speculation, it was a total coincidence that I was there. But, whilst it was horrific, at least I was able to see exactly what happened," she explains.

What followed was a difficult period, not least as Hazel was trying to balance her new role with continuing to officiate at Hamilton and looking after her children as the school holidays began, and felt she could, potentially, be the outsider in a large racing team.

A boost was provided by former general manager Mark Kershaw, who offered his services on a consultancy basis shortly after the incident. As a former Clerk of the Course, he has also been able to offer invaluable advice on preparing the jumps track.

Hazel, however, was in the hot seat. With the prestigious Ayr Gold Cup meeting looming, she had the challenge of addressing the problems and regaining the confidence of trainers and jockeys that the course was safe - and quickly.

"As is usually the case in these situations, advice came in from all quarters," Hazel explains. "But I chose to rely on John Souter, who is turf consultant at Hamilton, and, whilst he undertook soil tests, I began to examine the existing regime."

She discovered that there were three main areas to remedy. Running rail specialist, Dan Grigg of MK Surveys, studied the rail alignment on the home bend, and pronounced that the radii of the bend was not only too acute, but also continued to decrease as the runners rounded the turn.

"Ideally the bend should be at its tightest early on and then become more sweeping, otherwise you are asking the horses to do the impossible," explains Hazel.

"This, undoubtedly, was a factor, although some courses have even tighter bends than that," says Hazel. "Jockeys had commented on how tight the bend was - it was a matter of the angle being slightly wrong each time the rail was moved, and getting progressively worse. It is ironic because, unlike many courses, Ayr has plenty of space to create a more sweeping bend. We can still provide fresh ground with the gentler turn and there are no issues with camber."

"The course was being mown when there was no grass to cut, which was causing compaction - cores tested at the European Turfgrass Laboratories Ltd. in Stirling showed how bad this was. Whilst it is common practice to cut frequently to encourage vigorous growth, I proposed that we should cut less often, and against the direction of racing, so that the sward was facing the horses."

In addition, any attempts to remedy the compaction had long since been abandoned. "I found the verti-drain sitting in the shed - the groundsmen were afraid to use it as some tines had been lost on the course and it had never been repaired," Hazel explains.

She comments that this was symbolic of her greatest hurdle - that the groundstaff had no confidence in their ability to produce the racing surface.

"I insisted to the management that there would have to be investment to improve the course and they listened. Perhaps it took a major incident to make changes, but they were long overdue. Many racecourses lack the budget to invest in useful machinery such as the verti-drain, so to have it out of use in the shed was a great shame."

The divot mix was another area that needed addressing; Hazel had it tested at the same time as the indigenous soil and the results were not encouraging.

"The pH was too high and the mixture was too high in clay based fines, which restricted drainage and could have led to the surface capping," she explains. "Green shoots would appear and then just die back; there was a crossing area on the course that clearly showed the impact of this divot mix."

Coupled with the acidic indigenous soil, it meant poor growth, particularly on the jumps course, and a 'slimy' feel to the sward, so Hazel switched to the divot mix used at Hamilton, after analysis for compatibility.

"The groundstaff were again sceptical at the appearance of my chosen mix, but seemed pleased with the results achieved. It was a tough time for them - no-one likes to feel that their course is not up to scratch," she says.

Hazel credits the return of former head groundsman Jimmy Deans in September as a highly positive step, restoring morale and confidence within the team at a crucial time.

Whilst the renovation work was going on, the straight course was used for two meetings, but the jockeys got an idea of what was to come as Hazel had arranged for the bends to be hollow cored and these were used as pulling up areas and to access the start. "These solid cores came up which made the track look black, but at least they could see that something was being done."

The treated areas also offered more grip - previously, rain had lain on the racecourse making the sward greasy; now the moisture could move out of the surface.

Verti-draining was also beginning to have an impact on the jumps course. "There were no worms in the top three or four inches of the first sample core, now they are all through it which is great to see. Worms are free aeration!" says Hazel.

At the final meeting before the Ayr Gold Cup festival, Hazel briefed the jockeys on the measures taken, and the greatest vote of confidence came from Robert Winston, who had been injured at the course two years previously. "The jockeys said that the course was riding tremendously. This was against the background of considerable scepticism from the racing media - they were looking for a story. Fortunately for us it turned out to be a non-story!"

The condition of the course was also praised by racegoers, including steward David Goldie who knows a thing or two about grass, being an Ayrshire farmer.

"Comments were that the turf looked better and more vigorous. Not being that familiar with the course it was hard for me to see a big difference, so their input was appreciated. Looking back it was clear that the accident had been caused by a number of factors, including the condition of the grass, the compaction, bend alignment and heavy rain that had fallen, but we were now in a position to move on."

The Ayr Gold Cup attracted media attention for all the right reasons, with winning jockey Frankie Dettori performing his famous flying dismount and declaring that it was the race he'd always wanted to win.

But, moving on into the jumps season, Hazel was about to face another challenge, as the British weather took a turn for the worse.

"David Goldie told me that he had never known so many days when the temperature stayed below freezing," she reflects, "And we lost six of the first eight meetings of the winter. I was on a steep learning curve coming from the flat-only environment of Hamilton, and was desperate to get some experience of jumps racing before the Scottish Grand National meeting in April."

When the course finally thawed at the end of February, evidence of frost mould and a seriously backward sward greeted Hazel and her team.

"We needed a significant rise in temperatures and had an uphill struggle to prepare for the Scottish Grand National," she explains. "While the ground was frozen we had to minimise all traffic on the course as the surface was so fragile."

Race meetings across Britain that survived the winter often did so only because of the use of covers, but Hazel explains that it is a delicate balance requiring £50,000 of income to justify the £30,000 cost of the covers.

"We are looking at a covers sharing project with Kelso and Musselburgh, and we already cover all vulnerable areas, but huge manpower is required to lay and remove them."

And, when the ground has been frozen for so long, the covers may not even help. Hazel points out that a late February meeting was lost despite two frost-free nights, so deep was the ice in the ground.

As the jumps season draws to a close, Clerks of the Course at dual purpose tracks look to the flat season and, with Hazel's time at Ayr coming to an end, preparations for a revised fertiliser programme, mowing and aeration of the flat course swung into action.

"I decided to wait for the results of soil analysis before choosing a fertiliser regime as the course had always been over-fertilised," she explains. "It was too acidic, with too much nitrogen. We should be aiming for good root development and a hardy sward rather than a flush of growth."

One action that she did take was to purchase a disk aerator slitter from agricultural suppliers, Erth Engineering.

"I already use one of these at Hamilton, and it is great for getting air into the turf and encouraging root growth. The only limitation is that it can't be used too much in the summer without risking brown lines in the turf."

Hazel has a rather more sedate programme ahead of her on her return to 'just' being responsible for Hamilton, but new challenges are already being lined up, including a concert from pop group JLS, a progression from the course's after racing entertainment programme.

"We've had to look at promotion of the concert and aspects such as safety certification for the first time, which makes it interesting," she says. "One of the most difficult aspects of being Clerk of the Course is the need to balance what would be ideal in groundsmanship terms with commercial considerations. For example, at Hamilton we like to sand dress to improve the clay soil, but we can only put as much sand down as we can afford."

The impact of the recession was a serious concern for many racecourses, as Hazel explains: "Both courses are fairly remote from the main training centres such as Yorkshire, and we were worried that trainers might not continue to send their horses. However, they were very supportive in 2009 and that support seems set to continue this year."

When asked what she has gained from her secondment to Ayr, Hazel has no hesitation. "I realised that the confidence of the groundsmen is vital. They need good leadership to find pleasure in their work - Jimmy Deans has been a real boon in this respect - and get more out of it if they can see the effects of changes that are being made."

"We took the groundstaff to the European Turfgrass Laboratories to see the research that had been done for the course and then on for a pub lunch; no-one had done that before and it made them feel appreciated. I now have a happy and motivated team and that counts for a lot."

With a new Clerk being appointed as we go to press, Hazel has mixed feelings about leaving Ayr. "It's hard to hand over responsibility, as my time at Ayr has been so enjoyable, and I'm keen for the new regime to continue. But, I feel it is in safe hands with Jimmy Deans and his team, and I'd be delighted to remain involved on a consultancy basis if the need arose."