by External source
in Golf, Industry News, and People
on 14 Jul 2016 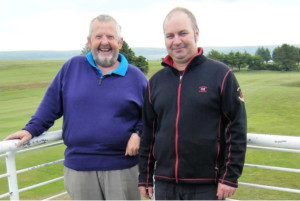 Andy started as an apprentice on 3rd June 1991 under the expert tutorage of the well respected late Ted Ainsworth.

Andy attended Ayr Technical College, gaining his greenkeeping qualifications. In 2002 he was promoted to Assistant Head Greenkeeper and on the retirement of George Wellman in 2012, took up his current post as Head Greenkeeper.

Andy is married to Kate, has two daughters Emma and Nicola and a granddaughter, Ruby.

Club president Jim Arnott carried out the presentation, making comment on Andy's dedication, enthusiasm and passion, to which he brings to his role at the club.

He said: "Every morning when I drive to the club, I look across the course and smile, seeing such a magnificent and wonderful site and that is in no small part down to yourself Andy, on behalf of the club, a heartfelt thank you."

You can read the original article from the Galloway Gazette HERE