1 Stratford Racecourse working with the elements 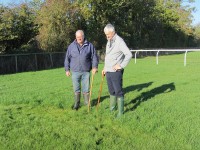 The summer weather of 2012 will go down as one of the most difficult to contend with for UK racecourses. "Yet, we could actually race today if we had a fixture," commented Stephen Lambert, Clerk of the Course and Managing Director at Stratford-on-Avon Racecourse, "and the reason for that is the vigour and structure we now have in the turf."

The deluge over the first weekend in November did, however, delay end of season renovations at Stratford as it was just too wet to fill and roll the track in preparation for the winter.

Racing takes place from March to November at the popular Warwickshire national hunt track. The principal meeting is in June and, for the first time in 2013, the AGA Ladies Championship final will take place on the same Friday evening card as the W&S Recycling Stratford Foxhunters Champion Hunters' Chase (for the Horse and Hound Cup), and the John Corbet Cup, sponsored by Wetherbys.

With the November finish to the season, getting renovations done in early autumn and taking advantage of mild conditions is essential. It takes some careful planning to protect the works whilst the last race meetings of the year are completed.

The hurdle track, which sees the most runners, was reseeded in the spring, and the chase track eighteen months ago, to improve the quality of the sward. Overseeding also takes place in September, during a gap in the fixtures before the final autumn meetings.

"It gives great recovery and comes through really quickly, although we always use germination sheets to help it along," he comments, adding: "It is also more economical than our previous mixture."

This year's autumn renovations also included the addition of a new drain at the appropriately named Muddy Lane part of the course, and the levelling of the take-off for the first fence in the back straight. 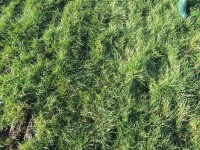 "We were able to install the drain, backfill and reseed in September and level and reseed the take-off before the final meetings," Stephen explained. "We could actually have jumped the fence if we had been forced to, because the reseeding to the take-off had grown back so quickly, but we were able to bypass and leave the fence out until our meetings next spring."

Placing a short piece of rail between the omitted fence and the next protected the new drain and the fast establishing reseeded turf without disturbing the racing line too much.

Occasional remedial work to the apron in front of a steeplechase fence is sometimes necessary because the shortening of a horse's stride, as it approaches the fence, pushes the soil up towards the take-off board over time, and high spots are also exacerbated by the build-up of fill used on take-offs."

"We try not to do too much if the fence is still jumping well," comments Eric Harris, "but it is a matter of assessing each fence by eye to see if it needs attention."
In the same part of the course, Eric and his team had also done some spot drainage by hand to a small area that required digging out and backfilling with gravel in order to relieve a wet spot.

Meanwhile, Stephen had been planning to regrade the inside of the bend running to the two mile start, where sinkage had caused undulations, in order to fill 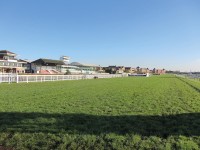 them and recamber the bend. This work did get done, but a little later in the autumn than he had hoped and, as a result, reseeding will be delayed until the spring.

"It's not a real problem as we have plenty of room on the bends, and we always try to move the rail to provide fresh ground for each meeting, whilst preserving the inside 10m for the following season. The bends can get quite cut up, especially as they get more water to try and reduce slipping," says Stephen.

Interestingly, he comments that the inside 4m of the hurdle track on the back straight is always firmer than the rest, which could be due to filling and sanding over the course's 150 year history. Or it may date back to the site's history as farmland - ridge and furrow was used extensively in the region to drain the clay soils - and the inner may be on an old ridge.

Some of the fences also appear to be set on a distinct 'platform' which may be a historical feature, with foundations used by the course's designers to protect them in flood periods. 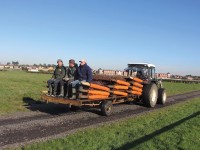 At the close of the season, the course is filled and rolled, with a final cut to the standard height of 12.5cm (5in) before winter.

Eric and his team are kept busy with fence building and remaking hurdles, as well as general maintenance before preparation for the new season begins.

"The course has to be ready for inspection by the BHA in February, so there is little downtime," he explains.

Essential spring work includes verti-draining with a machine hired from Worth Drainage, and Stephen comments that timing is crucial.

"The ground needs to be dry enough to crack - March would be ideal but April is more usual. We also hollow core the take-offs and landings to decompact them. The equipment is hired in and, if we had our own verti-drain, we would do it more often, although we do spike as well." 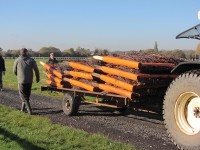 The staff give an early application of fertiliser to promote sward vigour as soon as conditions are right in the early spring. This year, a feed of 9:7:7 was given in early March. Whilst a mid- summer dressing of 25:0:5 is usually applied in July, the wet conditions and rapid growth of grass this year meant that there was a delay until 9th August, when an application of 18:5:18 was made at 25 grams per square metre. It is customary also to give extra feed to the take offs and landing of fences in the form of Sierrablen 15:0:22+fe at the rate of 30 grams per square metre. Regular use is made of controlled release products.

Stephen comments that Stratford has to work with the neighbouring River Avon, which threatens the course in periods of flood - there have been four severe inundations since 1997 - but also supplies its irrigation water. "We are either ladling it on or ladling it off!"

Flooding not only devastates racecourse buildings and causes compaction, but can also kill the grass if it is underwater for a week. "It can take the course six months to recover fully," points out Stephen, "Although the track is usually raceable within two weeks of a flood, nevertheless it remains patchy and inconsistent." 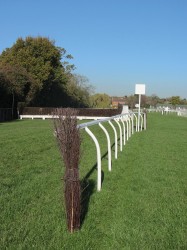 But, water is vital for summer jumping, where the British Horseracing Authority recommends that courses provide good going wherever possible. "We always aim to provide a predominance of 'good' ground throughout the summer. Some trainers complain that they would prefer more 'good to firm', but it has been proven that there is less risk of injury to horses and jockeys on good going."

Stratford uses both tow line and boom irrigation systems, and Stephen comments that the tow line is a lot quicker, capable of applying 6-8mm per hour across the course. However, the boom has its place for selective watering and irrigating in windy conditions. The ideal is to water over a long period, applying lower rates of irrigation.

Whilst the wet summer proved difficult for many sporting venues, at Stratford it made the task of producing good ground easier, he reflects.

"We only lost one meeting, on May 9th, but we were extremely lucky, although it is a well-drained track. Racing ground is unpredictable though - the back straight was wet in May, but is absolutely fine now."

Mowing proved tricky in 2012, when some courses were even unable to cut before summer jumping meetings. A front mount mower is used at Stratford, with any clumps of clippings collected by hand.

"The grass can lie when it is long and wet," comments Stephen, "and mowing is a time consuming operation as we can be cutting three times a week in the peak season." 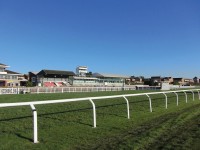 It's a small but dedicated team at Stratford, with just three full time staff including Eric, his son Matthew who takes charge in his absence, and Ben Stanley.
Eric has been at Stratford for sixteen years, after twenty-five years at Newton Abbott and stints at Kelso and Warwick. Stephen is in his fifteenth year at Stratford as MD and Clerk of Course, and was previously a partner at estate agents and land agents Knight Frank.

Experience clearly tells in presenting the best of jump racing to a knowledgeable, enthusiastic audience, whilst battling the worst of the British weather. Stratford can look forward to an exciting year ahead, whatever the elements throw at Stephen and his team.