"People often take for granted the sheer amount of work that has to be done in any one week to keep the course operational and, more importantly, to perform to a standard that attracts and pleases players"

Stratford upon Avon Golf Club's main claim to fame is its connection to Samuel Ryder, the founder of the Ryder Cup competition. Sam and his famous professional, Abe Mitchell, along with three former Open champions, George Duncan, Ted Ray and Alex Herd, officially opened the Hawtree/Taylor designed course in 1928, and Sam was to become captain from 1929 to 1931. He remained the club's Vice President until his death in 1936.

With the onset of the Second World War, parts of the course were given over to allotments. These were allocated to members for growing vegetables. The 7th, 15th, 17th and, later, the 12th holes were used for growing potatoes, whilst gravel was extracted from the 10th, 16th and 17th, leaving deep depressions that are a feature of the course today.

Imaginative tree planting from the outset has resulted in a veritable arboretum. Sprinklers were added to the greens in 1970 and to the fairways in 1999. The grandson

of the original course designer, Martin Hawtree (consultant to the R & A for the Open Championship courses), ensures that course changes are in keeping with modern needs, but safeguard the subtleties of the past.

The course has changed very little in terms of holes and overall layout although, as with many clubs, bunker placements and tees have been modified over the years to cater for the modern game.

The greens are still pushed up soil based, with no primary or secondary drainage. In fact, there is no drainage on the course anywhere as the natural soils are very free draining, hence parts of the course being quarried for gravel.

With the course prone to drying out, the club has invested in a fully automatic irrigation system to water greens, tees and fairways. A Toro system draws water from two boreholes with an extraction licence for 6,000,000 cubic metres, an amount not fully used to date.

The club employ five greenkeeping staff. Head Greenkeeper is Howard Middlebrook, who came to the club in 2003 having previously working at Bloxwich Golf Club for seven years and, before that, a number of other clubs, including Sinsheim Golf Club in Germany and The Warwickshire, where he was specifically employed to grow in and set up the course.

His first assistant is Sean McDade. Paul Snelson, Phil Morris and Chris Carvell make up the team. All are very experienced and qualified. Howard likes to ensure they take responsibility for the equipment and machinery, so they are assigned specific tasks and pieces of machinery to manage and maintain.

The team have over 100 years of greenkeeping experience between them, so they are well accustomed to the expectations and work ethos required to manage a busy members club.

Stratford upon Avon is a parkland course which has retained many original features; none of the greens have been modified and most of the bunkers are in their original position, as are the tees, but these have been made bigger to accommodate the increase in golf traffic.

The course is open 365 days of the year, playing off grass tees all year round. No temporary greens are ever used.

The staff start earlier in the summer months, working 6.00am-2.30pm and one hour later in the winter (7.00am-3.30pm). Howard always gets in an hour before his staff to check on the weather and plan the work for the day.

The club hosts many competitions and society days. On the day of my visit they were hosting their Seniors Open event, so the staff were in even earlier, starting at 4.30am and working until 11.00am, which allowed them to get the course fully prepared before play started.

As the saying goes, if you look after your equipment it will look after you. Apart from a couple of items, all the machinery is Toro; some £500,000 worth. Howard cannot fault it for reliablity and, he says, the service back up is second to none. "You might pay more for the equipment, but you get it back in the long term in performance and reliability."

"The machinery is fully serviced in house after every 100 hours of work," says Howard, "and they are greased and cleaned after use. A few years ago we invested in a Waste2Water washdown facility, and that has been a great asset."

"We have a five year rolling programme to replace machinery" explains Howard, "but the lads have looked after the machinery so well, we are getting another two-three years out of it. We now have a considerable fleet of Toro machinery, which has given us back up for most of our big machines, should the need arise."

As always, when I visit clubs I like to look around the course as soon as I arrive to take the all those important pictures that show the quality of the course and the work being carried out. Howard was keen to show me the condition of the course and, as you would expect on a competition day, it was looking immaculate; not a blade of grass was out of place. The greens were exceptional in colour and firmness and were running at 10.5 on the stimpmeter.

Howard measures green speed every week. "They rarely go below 9.5 on the stimp in the summer months," Howard says, "and 8.5 in the winter. For competitions we like to get them running between 10.5 and 11." The greens are very smooth and fast because of the maintenance regime Howard has perfected. It is, if you like, the much discussed 'Greg Evans' theory.

"With the greens being soil pushed up, with no drainage installed, we have to rely on their natural draining ability, which has been helped by the heavy rootzone dressings that have been applied over the years. It's a vigorous programme of aeration and dressings. The greens get vertidrained twice between October and December, using 13mm diameter, 300mm depth tines at 50mm spacings, followed straight after with the verticut units and sarrel rollers to help restore levels. Every six weeks, throughout the winter months, soluble iron is applied."

"During the first week in February the greens are again vertidrained, using 19mm diameter tines to a depth of 300mm but at 100mm spacings, again followed by verticutting and sorrel rolling."

"In the first week of March, without fail, I begin the spring renovations. I like to start early, hollow coring the greens with 13mm tines and topdressing with a fen dress 90/10 dressing at a rate of two tonnes per green, which is followed by a dose of turf hardener."

"A month later another tonne of topdressing is applied and dragmatted in. This continues throughout the year on a monthly basis, giving firm, smooth free draining greens." 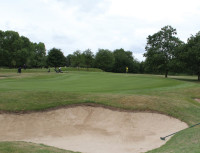 "Some preventative fungicide applications are made when required. There has been no nematode damage to date, and I reckon it is the 'robust' cultural practices that are the reason why." In April, a 6:1:12 Guardian NPK fertiliser is applied to help kick start the greens, with further applications of 12:0:9 NPK in May.

"The greens are cut daily at a height of 2.5mm in the summer months and 4mm in winter. We use the Toro Triple greensmowers, which are always kept sharp and accurate. A prism gauge is used to check the actual cutting height. I don't believe in using turf irons to gain speed, because I believe this impacts on the greens unnecessarily. We'll change the hole positions four or five times a week."

Tees are kept at 12mm and hand mown twice a week, they get vertidrained, topdressed and fertilised once a year, and are regularly divoted.

Fairways are cut at 15mm all year round and vertidrained twice during the winter months, aprons are kept at 9mm, whilst the rough is mown at 60mm.

"This short grass policy across the course is set up for the members, who do not want to lose their ball or be hindered by slow play. My ethos is to produce the course the members want."

Howard has built up a great relationship with the greens committee and works with them to improve the quality of the course. As he rightly points out, they pay his wages.

Winter work is centred on the usual tee and bunker improvements, tree work, path refurbishments and any other projects to improve the condition of the course. Last year, a number of tees were rebuilt along with a new path feature to the first tee, and a practice putting green.

As for wildlife, there is plenty about, including Muntjac deer, foxes, badgers, rabbits and moles, as for birds too many to mention, a pair of buzzards are nesting on the course. All twenty-five tit boxes have been full this year, with most producing broods of eight or more.

The course has a wide range of trees. Like most parkland courses they tend to follow trends over the years and become arboretums for ornamental specimens. There is a fine Liriodendron tulipifera (tulip tree) maturing nicely out on the course, along with many cherry trees that were planted in the 1970s. 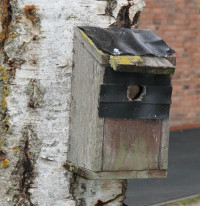 As for a wish list, Howard is content with the investment the club has made over the years and very happy with the way things are going. However, he did say, if there was one thing he would like it would be an extra member of staff, which would help enormously. "People often take for granted the sheer amount of work that has to be done in any one week to keep the course operational and, more importantly, to perform to a standard that attracts and pleases players. It is a constant battle with only five staff," he says "Also, with so many scheduled competitions, the time to carry out specific maintenance regimes is often compromised by the lack of resources. Having an extra pair of hands would make a huge difference."

With over 140 players taking part in their Seniors Open event, it seems that the club have it right on both fronts, a well run clubhouse and facilities and a head greenkeeper who is able to deliver members expectations, especially in a challenging economic climate.

Howard has perfected a robust greens management programme that, some would say, is not sustainable, but his greens have been consistent now for several years. Howard's little and often approach when it comes to aeration, feeding and topdressing the greens seems to be working very well at Stratford upon Avon. The condition of the greens were exceptional, especially when you realise there is no drainage and that they are cut at 2.5mm!