Street Scene has a team of around forty full time staff, a far cry from the department that once employed around 205 before CCT was introduced

These days Wolverhampton parks and gardens (and streets) are split into three maintenance areas. The North East is looked after in-house by Street Scene; the South East and West contracts, in partnership with the city council, are managed by private contractor, Enterprise. The three contracts cater for all of the street cleaning, bedding, general verge grass areas, cemeteries and the parks, including their sports surfaces. School maintenance in the area is maintained as a separate contract run by another council division, as are the arboricultural needs of the city.

Street Scene North East has a team of around forty full time staff, a far cry from the department that once employed around 205 before compulsory competitive tendering (CCT) was introduced in the late eighties.

Twice a year the department has to plant and maintain summer and winter bedding. For two to three weeks during each period, five teams of 3-4 people replant all of the planters, hanging baskets and roundabouts that adorn the city centre and surrounding area. In total nearly half a million bedding plants are used in the schemes. Once the bedding is in place, particularly throughout the summer, a team of two spends every day watering and feeding the plants to ensure a great floral display.

For all the hedges and shrubs in the area, another team will spend two periods each year, weeding, pruning and litter picking.
The spring and summer months are particularly busy and, when the grass is growing quickly, some of the street cleaning teams move over to grass cutting operations.

Street Scene carries out its own 'in-house' training and has invested in two of the staff to go on a 'Train the Trainer' course. These guys give instruction to the others on all aspects of machinery use and maintenance.

All of the street cleaning teams are trained in mowing and other grounds work operations, so that they can be pulled off street cleaning functions in order to bolster the under pressure grass maintenance crews during peak periods of growth.

When new machinery is purchased all the staff receive certificated induction training from the manufacturer. As a rough estimate the mowing teams have around 170 hectares to keep maintained to a reasonable height.

There are also three teams who look after the general grass areas; these include roundabouts, road side verges, housing sites and other open spaces.
One team looks after the city centre grass areas and fine lawns around areas such as the civic centre.

There is one tractor driver using a set of 5/7 Ransomes gangs, his role is to cut the parks and sports grounds in the area. Usually, these areas are cut at least once a fortnight, but that is subject to weather conditions and growth.

In total, on the North East area contract, there are twenty-one football pitches and two bowling greens to look after, all of which are situated within parks in the area.

As well as the mowing, the tractor is used to aerate all the football pitches using a Greensward Double Quick Outfield slitter/spiker. This operation is carried out monthly on all the pitches. There have been noticeable improvements to the drainage and performance of all the pitches since this was reintroduced in recent years.

The pitches don't get the benefit of any divoting, or even harrowing, so local levels can be quite poor.

All the pitches are fertilised annually, usually in the spring. Due to financial constraints there is little renovation done at the end of the season either. Usually, this just amounts to the goalmouths being retreated and topped up with 70:30 rootzone, before being seeded with ryegrass. 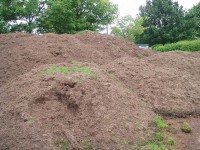 Last year the council took all the arisings from Wolverhampton Wanderers FC's end of season renovations. Around 500 cubic metres of material has been stockpiled in one of the park's car parks, and will be a great dressing to be used on the pitches and flower borders in 2009. It will enable the department to do more for their existing playing surfaces in future years, as well as seeing this spoil recycled for the benefit of the city.

During the season a two-man team spends Thursday and Friday each week marking out all the pitches. The bowling greens are maintained separately and have a more intense maintenance schedule. The greens are mown three times per week during the summer months and are regularly aerated and fertilised. Although they are subject to quite a lot of vandalism, the surfaces are in reasonably good condition and play host to three or four afternoons of bowls for the local residents. The department doesn't cater for any cricket within the North East contracts; however this is soon to change with a number of locations currently being developed as cricket wickets within the city.

Nearly a quarter of all the maintenance staff are qualified with PA1/PA6 certificates, which means that spot treatment of weeds can be carried out by many of the personnel including street cleaning operatives. Due to the time and scale involved, Street Scene outsource all the main spraying of highways and pathways as well as the selective spraying on the grass areas.

For the football, the goals go back up during the second week in August; before they are erected the steel posts are all rubbed down and repainted.
On the whole, vandalism is relatively low, there's litter to pick up and occasional graffiti to remove from pavilion walls. On the pitches the teams keep an eye out for broken glass and, once in a while, a stolen/burnt out car appears overnight and needs to be removed.

The street cleaning teams work rotas covering seven days a week. There are five teams of three, with side loading vehicles for emptying the bins and they carry out manual sweeping in the city; there are four more operatives on precinct sweepers and a further two driving the larger road channel sweepers. A team of four have hand-carts to sweep the main shopping areas in and around the city and town centres.

Within the cleaning team there is also an out of hours call out system for major incidents around the city, 365 days a year. The team are responsible for the clean up of vehicle fuel spillages, animal deaths and RTCs (Road Traffic Collisions). This team liaises with the police to get main roads cleaned and re-opened as soon as possible after incidents.

As local authority employees they are easy targets for criticism but, in my experience, they do an excellent job of keeping our parks, gardens and streets clean, safe and usable.