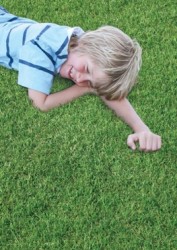 An extensive assessment of the botanical composition, general condition and appearance was conducted by Dr.A J Newell, Head of Turfgrass Biology in September 2006.

The report concludes "The Rolawn Medallion turf examined in 2006 was uniform in appearance, free of diseases and presented to a very high standard. It was also extremely clean. We failed to find any broadleaved weeds or weed grasses in the 5,000 spot botanical assessments made. Given the very difficult growing conditions experienced during the summer of 2006, it is difficult to understand how Rolawn have maintained their very high standards, but they have.

A very important point to make is that Rolawn consistently produce high quality turf. The STRI have now been involved in making independent assessments of Rolawn turf for a ten year period. Over this time, the quality of the turf has never slipped; it has always been of the highest standards."

Cedric McMillan, Rolawn's Sales & Marketing Director commented "Our commitment to subject our turf to the most rigorous external independent scrutiny highlights our confidence that Rolawn produce Britain's Finest Turf. It is no coincidence that Rolawn Medallion was incorporated into 7 gold medal winning exhibits at RHS Chelsea and has recently been used by some of the countries leading landscapers at the BALI National Landscape Awards. Customer research endorses our view that independent analysis by the recognised UK authority is the ultimate testimony and reassurance as opposed to self policed specifications."

Copies of the report are available upon request. Contact lorraine.willis@rolawn.co.uk