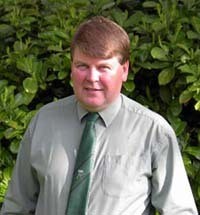 Dr Baker joined STRI in 1980 as their research Soil Physicist and has co-ordinated a vast amount of research during the last twenty years. Governing bodies of sport in the UK that he has worked with include the Royal & Ancient Golf Club of St. Andrews, the Football Association and the Football League, the Rugby Football League and the Rugby Union, the England and Wales Cricket Board, the Jockey Club, and the British Greyhound Racing Board. In addition, he has received research funding from the United States Golf Association and the Netherlands Golf Federation.

In his career, Stephen Baker, BSc (Hons) PhD, has contributed over 250 scientific and technical papers and articles. He is the author of the book 'Sands for Sports Turf Construction and Maintenance', published by STRI and a must for anyone managing or constructing sports grounds or golf courses.

The National Turfgrass Foundation Research Award is presented in recognition of an individual's outstanding contribution to turfgrass research and their dedication to the industry. Martyn Jones, a co-Founder of the NTF said, "Dr Baker is highly respected throughout the World for the extent and quality of his research. I can't think of anybody more deserving of the accolade."

It will be presented to Dr. Stephen Baker at the 2004 BRITTIR Awards Reception and Gala Evening that takes place during the National Turfgrass Foundation's 'In Pursuit of Excellence' Conference, 29th November to 2nd December 2004 at Southport.