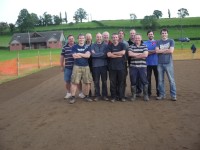 After nearly 50 years without a permanent home, Strollers Cricket Club from Herefordshire have now setup base in the village of Fownhope.

The club has shown a statement of intent by raising £10,000 through fund-raising, grants, loans and donations to construct a new square in the south Herefordshire settlement.

Since the clubs formation, they have called numerous venues in Ross, Hereford and Ledbury their "home ground", but this latest move will hopefully now be a permanent venue for the Marches League club to play their home matches.

With a team of over a dozen volunteers, the club constructed a new square in 5 days finishing on 14th September 2012. A great team effort began with the foundations of 8 inches being dug out for the 7 wicket square. This was then filled with 80 tonnes of gravel and 80 tonnes of loam, which was levelled and compacted by hand. The "Club" loam was supplied by Boughton, which provided the perfect mix of quality and affordability for the club.

The club hope to start their 50th anniversary year in 2013 with the first team playing on the new grass square, with the second team continuing to use the artificial wicket. Then in 2014, both sides will use the grass square.

Club Groundsman and co-ordinator for this project, Mark Powell said "This is an exciting time in the club's history, it is the first time we have undertaken a project of this size and also establishing a home for the club. Boughton gave us great advice during the planning stage and we were impressed by the timely deliveries which allowed the project to remain on track."