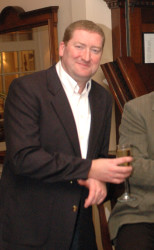 As many people in the industry that knew Stuart would agree with, he was very headstrong and showed this early on by leaving Edinburgh University and moving "down south" to Surrey. During this time he was gardening, selling plants he also started to show a natural aptitude for the soil. Following this discovery Stuart embarked on a soil science course at Newcastle University in 1986.

An intelligent and determined man, of course he graduated and found gainful employment as the Estates Manager at Close House in Northumberland going on to work for Sunderland County Council.

Stuart had a very keen interest in scuba diving and became a part time instructor at Hexham in Northumberland. It was during this time in 1995 that Stuart met his wife of 14 years Audrey whilst he was working at Rickerby Horticulture.

Stuart developed his own inimitable style of agronomic advice to greenkeepers and groundsmen based on sound scientific principles. Stuart was never one to rest on his laurels and his social life was as full as his work life with such pursuits as snowboarding, boating and the aforementioned scuba diving. He was also an accomplished cellist and keen pot-holer although not necessarily at the same time. In the Summer Stuart was never far from the barbecue with glass of wine in hand.

In 1996 Stuart married Audrey at St. Oswald`s Church on Hadrian`s Wall, left Rickerby and joined Indigrow as technical sales manager and moved to Devon. In 1998 Stuart was promoted to Technical Director of Indigrow and was responsible for developing the Scandinavian and European amenity markets to great success as well as maintaining key accounts at home in the UK.