I'm not sure anyone involved with Essex County Cricket Club realised, at the time, just how significant the signing they made back in the spring of 1984 would be, when a fresh-faced Stuart Kerrison walked through the gates at the County Ground to begin his youth training scheme. 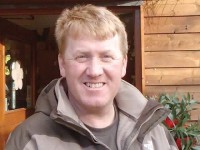 Yet, twenty-five years later, minus the fresh face, Stuart is still there, and regarded as one of the best cricket groundsmen in the country.

Seven years after he arrived, Stuart was appointed Head Groundsman at the tender age of just twenty-three. At that time, he was the youngest Head Groundsman on the county scene.

Why Stuart got into cricket remains a bit of a mystery, but he claims that, if his mum had allowed him to join the army, he may well have never set foot in a cricket ground. Stuart certainly isn't a big watcher of the sport and, apart from the opening over or two (to see if his pitch is playing okay), he tends to spend his matchdays reading, entertaining his young family or happily chatting to staff and members.

Stuart's dad and two brothers are all skilled carpenters but, if anyone were to witness the Essex groundsman with hammer, nails and a piece of wood in his hands, it would soon become apparent why he didn't follow in their footsteps!

But, Stuart certainly loves his job of preparing cricket pitches, and even spent two winters overseas when he was offered the chance to go to South Africa and become groundsman at Newlands in Cape Town.

However, after spending more years than he cares to remember 'married to his job', Stuart met Marion and they got married in early 2003 (outside of the cricket season of course!) before, in 2007, the next generation of Kerrison groundsmen was born when they produced a bouncing boy.

However, Fin's timing wasn't so good, and he decided to turn up on a matchday! Marion and Fin have certainly changed Stuart; long gone are the days when he kept his staff at work simply to entertain his lonely days!

Time off is now more frequent so, with lighter covers and better machinery, his current team of Tommy, Scott and Dave have never had it so good. If they don't believe this, they can ask two of Stuart's most loyal staff members, the two Phil's (Jeggo and Burton), who can still remember the darker days!

After 25 years with Essex, Stuart's enthusiasm still remains the same, and he relishes the challenge of producing good cricket pitches and helping Essex's bid for trophies. In 2008 Stuart also received the award as runner-up for 'Head Groundsman of the Year' for his first-class pitches. I wouldn't mind betting that, in another twenty-five years, Stuart is still producing pitches for Essex. That's if his back holds up to the challenge, of course!