0 Stuart punches above his weight to win accolade! 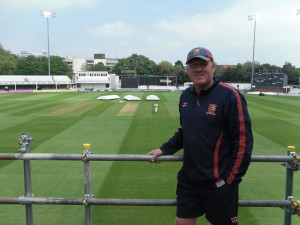 Punching above your weight is a phrase not often associated with the game of cricket but that is exactly what Stuart Kerrison has done!

He has put all his 27 years' experience with Essex County Cricket Club to good use as last season visiting umpires rated his pitches second in the country, just behind Trent Bridge but ahead of all other test match venues - an outstanding result for a 'Category C' county ground.

What's more in his role as head groundsman, Stuart has to look after four pitches at Chelmsford; Colchester; Billericay and Southend. Most first class games are played at Chelmsford with the others used for 2nd XI, youth and girls matches.

"I think it was the consistency of our pitches and that there was not much seam movement in such a wet summer that impressed the umpires," said Stuart.

Stuart is lucky in having excellent groundsmen at each of the match venues who are very well versed in how to look after things, although he helps with the running of matters when there are first team matches. 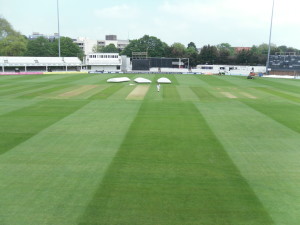 "The biggest challenge last year was the weather, while the start of the cricket season seems to be getting earlier and earlier," said Stuart who joined Essex CCC in 1984 on a youth training scheme and worked his way up taking over the role of head groundsmen when he was just 23.

When it comes to grass seed Stuart has been using BAR Extreme for the last six years.

Stuart is in no doubt about the qualities of BAR Extreme; "I like the fast germination/establishment rate, the resilience to wear and the look it gives to the pitches and square. Germination seems to be better than other grass mixes, certainly on our grounds and the fact it establishes quickly is a massive plus for us.

"We are not planning to do anything different other than to try and stretch the budget a little further!"

For more information click on the following link :-www.barenbrug.co.uk