"I think school groundsmanship is the ultimate round-the-calendar professional challenge. No two days are the same. I love it"

Whitgift is very much a school where results count and get recognised. It is the only school in Britain to win national titles in all four of the major team sports - rugby, football, hockey and cricket. For two consecutive years it has won the Independent Schools Award in the Daily Telegraph's School Sport Matters. Its rugby first XV recently won the National Schools Under-18 Cup, again for a second consecutive year, and all Whitgift eyes will be on Lawrence Okoye who, in a GB vest, has a real chance of an Olympic medal in the discus. He's already knotched up the best throw in the world this year, and he even has his own training circle in the school grounds.

Whitgift has always taken its sport very seriously. Nowadays, it is taking its pitches just that bit more seriously too. It has spent about £500,000 on them in the last couple of years. 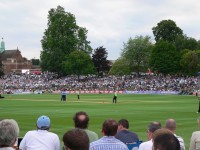 Its links with Surrey County Cricket Club as a major outground away from the Oval is well known in the game. Last year, as well as a county championship match against Essex and a CB40 game against the Hampshire Hawks in May, Whitgift's Northfield, which can host up to 5000 spectators, staged its first Twenty20 encounter. Surrey took on Sussex in front of Sky TV cameras, and Stuart Webber, at the school less than a year as Head Goundsman, says it was perhaps the most nerve racking yet exhilarating day of his career.

"The Kia Oval leave pitch work pretty much to us at the school," says Stuart. "They had a quick look at the pitch prior to the four day game, but left us on our own for the Twenty20. We knew we had to cut the strip just that bit shorter than for a championship match, because the demand is for a fast, hard track, a batsman-friendly one, so we did."

This was life in the fast lane for the twenty-six year old, starting work at 4.30am and having to contend with camera crews, the wires and all their kit getting in the way of pitch work.

"The first ball was struck for six, out of the ground," Stuart recalls. "We'd done our job and the crowd loved it. Surrey won, too."

"I'm a winter games and pitches man at heart but, in the short time I've been at the school, I've grown to love cricket and the work involved."

This year, there is a break from Surrey cricket at Whitgift because of building work on a new boarding house close to the Northfield outfield. It will be back next year, however, and Stuart says he can't wait for the challenge.

Stuart took up his appointment as Whitgift Head Groundsman in September 2010. He'd done his apprenticeship on the sports grounds at St John's College, Oxford, achieving NVQ Level 3, followed by a time with Chelsea FC, at its Cobham training ground and at Stamford Bridge. He then returned to his native Oxfordshire as Head Groundsman at Cokethorpe School near Witney, also an independent establishment, which has 114 acres of grounds.

"When the headmaster here, Christopher Barnett, interviewed me for the post, he felt I was too young to cope with the pressure of all the tasks. On his shortlist, I was up against a county cricket groundsman and a professional football club head groundsman. I tried to assure him I was used to pressure and dealing with pitch work at 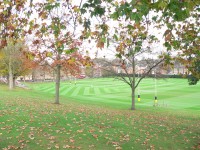 top level. As well as the experience I'd gained at Chelsea, I'd handled minor county cricket during my time at Oxford University. Most of all I tried to impress on him, and the School Bursar James Stremes, that I had experience of and relished the ever changing, constant pressure of school grounds work. It must have done the trick because, after they'd asked me to go for a walk, they called me back and offered me the position."

Stuart gives the impression of being very much a 21st century groundsman. When he arrived at Whitgift things were ticking over, but only just. Staff levels were too small for the work to do and the kit was tired, as were the pitches.

In 2010, the pitches were dry and worn, according to Stuart, principally because of the chalk underlying them. The real problem, he said, was that no one had been in charge for quite a while. There was no overall plan. Things were done piecemeal. He was determined to do something about all of this and lead from the front.

"There was, and is, some brilliant knowledge here," says Stuart. "However, the overall picture had fallen apart. Individuals, not unnaturally, were just getting on with their own tasks. Tunnel vision had set in."

He now manages a team of eighteen, not only working on the sports pitches, but also looking after the gardens and a burgeonin 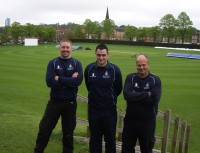 g wildlife facility at the school. The team includes two experienced men who joined the school as part of Pitchcare's 'Find a Job' campaign last year. Andy Smith, who'd been made redundant from the staff at Millwall FC, and Peter Harsun, redundant from golf course greenkeeping, are now key seniors at Whitgift.

When he took over, Stuart was puzzled how aeration had been carried out, because there was no spiker at all amongst the equipment! He rectified this by purchasing a deep tine Soil Reliever, which, with all the spring rain this year, is already paying dividends.

The school has six rugby pitches, one football pitch, five cricket squares, plus grass cricket nets and an artificial pitch for hockey and tennis, which is soon to be upgraded with a new Tiger Turf surface, apparently coloured blue in keeping with the Olympic colour code for hockey. Work on this was due to begin at the end of June and be completed just two weeks into the autumn term.

It has to be a pretty adaptable site, in line with most schools, with the first XV rugby pitch becoming two junior cricket squares for the summer term. An extra

pressure for Stuart and his team is that there are no separate training areas. All practice is done on the playing pitches, with the exception of the cricket nets. It means that recovery time is that much less.

Notable innovations introduced in the twenty months that Stuart has been at Whitgift include the installation of a Hunter computer-controlled irrigation system for its two main sports areas - Northfield, where Surrey plays its cricket, and Southfield, mostly used as an athletics track and also for cricket. There are twenty-five pop-up stations in all, and Stuart says there are plans to make the system controllable via iPhone and iPad very soon.

"This has been surely one of the strangest springs ever when it comes to watering," says Stuart. "We had the sprinklers running frequently in March with all that warm, dry weather, but since Easter, and after the drought order came into force, we've been 'up to our knees' in rainwater."

Showing just how water is a commodity rather than an element that is free to us all, Whitgift gets its water for irrigation from a water company in Lancashire. It's delivered regularly by tanker and goes straight into the school's irrigation tank.

Another major work in recent times affected the school's Southfield, which oddly is not to the south of Northfield. It was koro'ed and laser level

led last July using 700 tonnes of topsoil and looks a picture, even on a cold, wet late spring day.

Talking of weather, Stuart has persuaded the Bursar that an investment in a weather station would be money well spent. The plan, later this summer, is to have a Davis Vantage Pro 2 installed, and this will be connected to the school's website for use as a science teaching facility as well as a pitch care asset.

In February this year, the whole of the outfields and all of the pitches were re-seeded with Barenbrug SOS, and 740 tonnes of topsoil were added. In June, a further re-seeding, with a combination of 100% ryegrass iSeed Pitch and 100% fescue iSeed Fairway, was scheduled.

Another routine Stuart introduced is daily cutting of all the pitches and outfields, almost without exception, come rain or shine. They are also fed every four weeks. The weekend coming up was a big cricket weekend for the school, with matches against fierce rivals St Bedes. 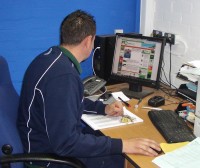 Liquid feeding of the outfield, earlier in the week, had left the outfield looking magnificent, if a little soggy. The cricket season at Whitgift had, thus far, been a damp squib. Only four games in six weeks had been possible, so fingers were firmly crossed for the St Bedes matches. The business area between the stumps looked ready for action, invitingly white and flat. County standard covers were keeping it so.

As part of his action plan to make Whitgift pitches even better, Stuart got the Headmaster's backing for stopping pupils' breaktime use of the four main sports areas - Northfield, Southfield and the so-called Big site and Little site, again, oddly, not reflecting their relative size. They now have a restricted, yet ample grassed area alongside the indoor sports hall for ball games and the like. Stuart reckons this is already making a noticeable difference, and respect for himself and his team has gone up a few notches too. They certainly looked every inch professional in matching groundsman kit.

The school has sport as a curriculum priority and facilities are always being extended. In 2008, golf was added with the introduction of a golf academy, 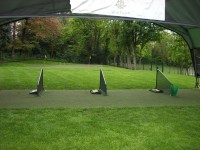 with facilities including a two-tiered green with a 30 to 40 yard chipping practice area, as well as several smaller chipping pods, a four-bay section for driving and a putting green. All pupils are able to get lessons in school time from golf professionals. The academy was officially opened by HRH Prince Andrew.

Stuart vows to continue to drive Whitgift pitches forward. It's good for the school's sporting prowess, and it's good for business. Parents, above all, want and need to be impressed by the outdoor facilities and surroundings. At Whitgift, they certainly are.

"I think school groundsmanship is the ultimate round-the-calendar professional challenge," says Stuart. "No two days are the same. I love it."