Nothing stays the same forever. Maintaining the swathes of grass on which our existing and budding sports stars perform may seem to those outside the industry as crafts steeped in age-old practices pursued by die-hard 'salts of the earth'.

The reality is startlingly different, however, as technology and scientific knowledge play an increasingly important role in a burgeoning billion pound-plus marketplace.

The pace of change and demand for ever improving, quality surfaces have sparked councils and clubs across the country to confront the urgent requirement for young, fresh minds to take the industry through the 21st century.

And it's the educational progress of some of those fresh young minds that Pitchcare is charting as they make their way through their apprenticeships and various levels of qualification to move into positions where they can make their own mark on tomorrow's industry.

We'll be monitoring three students, each at different educational levels, and each intending to take on different roles within the industry. Periodically, we'll report on their experiences, both in the college setting and in their work places, comparing and contrasting their views and opinions of their college work and their day jobs.

In this first article, we introduce our three students, who explain why they are taking their chosen courses, what they think of the industry they work in and how they might fashion change within it. 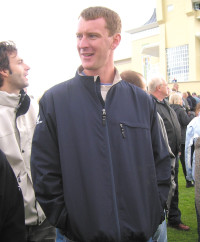 Stefan Sheraton has just started a year's full-time MSC course at Cranfield University in sportsturf technology after spending nine years working his way up at Wisley Golf Course in Surrey and acquiring the golf bug after completing work experience at a local course when still at school.
It was mainly word of mouth that prompted Stefan to enter the industry. "I'd heard of the IOG and BIGGA through school and my parents helped me pick appropriate colleges to apply to."

He began as an apprentice at Wisley, moving up to second then first assistant under the course manager, before becoming a spray technician, a job he held for two and a half years.

"I felt that I had hit a brick wall and that I had nowhere else to go at the club," Stefan recalls. "I needed to better myself." Stefan had completed his National Diploma in sportsturf management before gaining his National Certificate and NVQ Levels 1 and 2 in basic horticulture and in sportsturf management.
The MSc course is a tough step to take, Stefan admits, but one that, once taken, will be the springboard for further progression in the industry, he believes. "The qualification should enable me to take a job as a course manager or to set up as a consultant to the industry," he says.

"Practical things appeal to me most," says Stefan, "certainly until I'm in my 40s, when something on paper, hopefully, will help me land a desk job."
But golf is his first love. "I'd like to be back on a course eventually. There's more money in the golf sector," he says, "although wage scales in the private schools sector are moving nearer parity."

Groundsmanship desperately needs to change the perception of it held by the public, Stefan believes. "Too many people still think groundsmen just cut the grass. They have to start appreciating that groundsmen are practical scientists and engineers. The number of specialist areas we manage has to be portrayed more widely. The industry needs greater recognition. After all, it's those with practical skills that make the world go around."

The sector lacks glamour, Stefan feels, and those who do good work often fail to receive the plaudits they deserve. "When a golf course plays really well, and the players refer to the quality of the playing surfaces, those who have done the work to make them that good rarely get to hear the positive feedback."
He goes on: "If you ask the public if they can name a head groundsman, probably the only one that springs to mind is Eddie Seaward of Wimbledon. "He is becoming well-known now, but what about all the others. This is a bridge that we have to cross if the industry is to move up a level."

Meanwhile, of more pressing immediacy is meeting the £3,200 tuition fees and £320/month accommodation costs of living on campus at Cranfield University that occupy Stefan's thoughts. 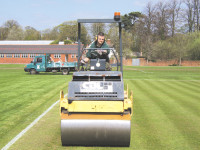 There's a nine-hole golf course on the estate, which is open to the public as well as students, and football and rugby pitches used by Bridgend Academy.
The college offers NVQ Levels 2 and 3 in sportsturf maintenance, HNC in turf management, a National Certificate and an Advanced National Certificate in horticulture and an HNC and HND in landscape design.

Annual intake on the sportsturf maintenance course averages between 15 and 20 students, reports Paul Discombe, John's tutor at the College, but numbers have risen this year "for the first time in many years", he says. "So, too, have numbers of students taking horticulture", he adds.
John has entered his second year of a two-year NVQ Level 3 in turf culture and sportsground maintenance. The 20-week block programme runs from the first week in October through to April. "The programme fits in well with the groundsman's year," John explains, "because September is a very busy time and so too is April."

On Thursdays he has day release from his job as a full-time horticultural apprentice for Cardiff City Council, where he works for the rest of the week based at Black Weir playing fields and Bute Park, one of the City's biggest parks.

He left school at 17 with six GCSEs to move straight into a job at Cardiff Rugby Club as a trainee groundsman, during which time he completed an NVQ Level 2 in sportsturf maintenance at Llandaff College.

Already marked out as a future mover and a shaker in the industry, John recently clinched the IOG's Young Student of the Year Award for Wales and South-east England, also picking up the Vale of Glamorgan Training Board's Young Apprentice of the Year 2005.
His immediate ambition is "to move up the career ladder" in the industry. "It's a career well worth pursuing," he says, but he also believes that horticulture and sports turf maintenance is hiding its light under a bushel.

"The industry should be more heavily publicised to school-leavers. Unless you are already aware of horticulture and sports turf, this is not an industry that you would think about entering necessarily. There should be greater accessibility for schools to the sector."

His wish is also to see the creation of more apprenticeships, and he adds tellingly, "I and a colleague were the first Cardiff City Council apprentices in horticulture for about 30 years when I started work there in 2003. Now another four have joined us, with another two due to be taken on later this year." Like a growing number of councils around the country, Cardiff is realising that it has to make moves to plug a skills gap that had been created after a decade of compulsory competitive tendering, when training in-house had been moved on to the back burner.

After completing his Level 3, John hopes to move into a full-time post with Cardiff Council. His boss Robert Jones, the Parks Manager, speaks highly of John. "He shows all the qualities needed to excel in his profession. John is a model professional and, in nearly four years, has never lost a day through sickness. His performance in college and in his work placements speak for themselves." 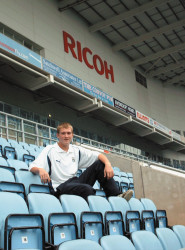 Andy Lee has held a position as apprentice groundsman at Coventry City FC since August 2005, when he came straight out of year 11 at Cardinal Wiseman RC School in the city armed with nine GCSEs.

"At first, I wanted to work as a landscape gardener but, when I visited a Moreton Morrell College open evening in July last year, I read details about greenkeeping and sports turf management. That's when I changed direction."

A committed sports follower - "I'm into football (he watches Coventry regularly), rugby and cricket" - Andy knows now that he wants to work outdoors in an industry that keeps him close to the action on the pitch.
Following that open evening, the college phoned him to confirm that they could arrange an interview for him with Coventry City FC's Head Groundsman, Mike Finch.

Happily, the meeting went well, Andy was taken on as an apprentice and, in the September, he began an NVQ Level 2 one-year course, which he completed this June.

Coming straight out of school, Andy confesses that the NVQ was very different in terms of its routine, with its "jobsheets and tasks". "But within two months I had found my feet and I think I completed the course to quite a high standard," he says proudly.

His certificate came through in early October ("very quickly, actually"). He's now started the Level 3, two-year course, working to a day release. "Four or five students were invited on the course after completing their Level 2 NVQ," he says. "I've joined around 15 other students who are in their second year."
Andy has already noticed a marked change from Level 2. "They expect far more from you," he says. After Level 3, Andy plans to gain more experience at Coventry FC and hopes to move up to become assistant groundsman there.

The support he receives from head groundsman Mike Finch and his deputy John Ledwidge is invaluable, Andy says, "I can always go to them and pick their brains about anything I'm unclear about." Another big plus about his job is the team bonding, especially on key occasions. "Match day is a big event for all the staff, with everybody needing to be at the top of their game, whoever we are playing host to. We all put in a huge effort before and after the game. It's a long day."

He, too, has strong opinions about his chosen profession. "Many in the industry work long hours but, when you see how much the players make compared with say groundstaff, it makes you wonder. A few players ask about the state of the pitch and may comment, especially if it is looking really good. We've had players say that the pitch looks like Wembley and that gives you great job satisfaction."

Groundsmanship needs more younger people, Andy believes. "A groundsman isn't just an old man sitting on a tractor on a pitch. They are far more than that. "It's great to be able to play a part, even though you may not be the greatest sportsman in the world."