Recently the workshop trainee mechanic started his course at Evesham College in Land Based Service Engineering NVQ levels two and three. Since then I have had contact with the lecturer there, one Mick Beard and during one of our discussions the subject of the students sheltered working environment came up. 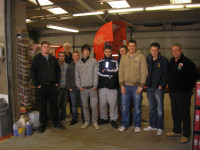 None of the students in Mick's third year level 3 are golf course employed technicians; one or two are employed in "domestic" type workshops and the rest in professional dealerships. This gives them a very narrow view of what machines are actually used for and, in my opinion, gives little job satisfaction.

I suggested to Mick that a visit to The Celtic Manor Resort might prove to be enlightening for the students, we have a huge fleet of very diverse machinery here employing various technologies, many of the students won't have seen them before let alone worked on them. Mick readily agreed and after a couple of E-mails a date was set, the 8th of April it would be.

The day dawned cold and frosty with the promise of sun later, sure enough nature did not let us down and it turned into a beautiful sunny day with a bit of a chill wind, a bonus in the early British spring. Mick and his students arrived around 10 o'clock and we gathered in the workshop for a general chat about work in a golf course workshop. 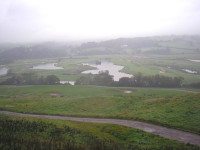 I stressed that being the resident technician would mean much more than repairing the golf course maintenance machinery, that they would become the "go to guy", this would mean all things broken would (eventually) become part of their job. The blocked drain, broken window, toilet won't flush, this will all get dumped on you, why? Because you're good with your hands and you will (probably) have the tools to do the job or know where to get them.

A couple of years down the line and the course technician is valuable indeed, very much taken for granted unfortunately, but a valuable employee nonetheless.

We moved into the yard where much machinery gets parked, we have limited space for secure parking so the hardier machines that are difficult to steal are parked outside. I showed them some aeration and decompaction machinery and spoke about the different machines using different methods to achieve a similar end. We continued to look at various machines both in the yard and in the building, I answered questions as simply as possible so they didn't get bogged down with unfamiliar terminology. 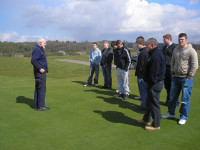 We surrounded the Bernhard & Co. Express Dual cylinder grinder and the Angle Master bedknife grinder, talked about relief grinding and it's benefits, non-contact bedknife to reel adjustment, bedknife angles of ejection and all things grinding.

A trip out on one of the golf courses was in order at this point and we made our way to the 2010 course clubhouse stopping on the hill to admire the view. One of the students asked a very good question "how do you get the stripes in the grass", now to all you grass guys out there this must strike you as a bit fundamental, everyone knows how you get stripes in grass after all. But this was the very reason they were invited in the first place, knowing how the machine works is not the same as knowing what it does or how it's used, I thought it was a very valid question, why would he know, after all it's not his job.

We moved onto the golf course and looked at a couple of greens that had recent renovation scars yet to heal, and a brief explanation of how thatch accumulates, it's detrimental effect on greens (primarily), how to help nature to decompose it and what machines/methods are employed to remove it and/or control it. 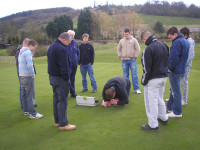 I got out the macroscope and a workshop kneeling down board and everyone peered into the jungle that is a golf green. Many remarks about the size of grains of sand, insects and blades of grass were made; this was a true eye opener. I explained that the quality of cut is of paramount importance on a golf green not only for aesthetic reasons but for the health of the grass. They were told the blades of the plant must be cut with very sharp blades to minimize the wounding and accelerate the healing process, this in turn would keep the plant healthy, strong and more resistant to disease than if cut with dull blades where a certain amount of tearing will take place. The clean cut from sharp blades can easily be seen using the macroscope, as can the undesirable tearing from dull blades which makes the macroscope an essential tool for the golf course technician. 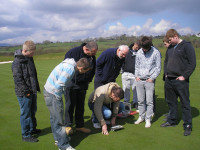 Next came the prism, some surprises there in the difference between the bench setting and the true HOC.
Next we visited the site of an overgrown copse that had been recently cleared, many weed trees had been removed together with bramble and bracken. The raw stumps of the weed trees bore testimony to the amount of hard work that had gone on there. The trees that were left had ornamental value, some landscaping is yet to be done and the whole area will have been transformed. The purpose of our visit there was to bring home the fact that no matter what maintenance or improvement tasks are carried out on the golf course they will have a big impact on workshop activity. In this case many chainsaw chains were sent for sharpening and chain oil collected, a woodchipper was hired and had to receive workshop attention while here, our own tractors and trailer were used to haul the debris off the renovation site to where it was to be reduced for recycling, this put more hours on the clocks bringing closer their next service.

All in all a satisfying day for me and (I hope) an enlightening one for the students, showing them perhaps that there is life outside a dealership. I think Mick Beard thought it a useful day for the students as it showed them not only what the machines are used for but, just as important, what is expected of them in the right hands and a "field" visit would be included in the syllabus.

I think that being employed in dealerships leads the students to think that when it leaves their workshop that's it; no more attention or adjustment until it comes in again, their visit here showed them that is not the case. Not that it applies to us a great deal as 95% of workshop tasks are carried out "in house" and very little is contracted out.

I think the students left Celtic Manor with a better insight into the workings of a golf course, what is expected from machines, why such precision is necessary on greens machines that regularly cut grass at heights of cut as low as 2mm and the problems that can arise from this.

After seeing some of the machines commonly encountered on a golf course that they may have to service/repair during the course of their working life they may now give Mick Beard their very fullest attention during lectures.