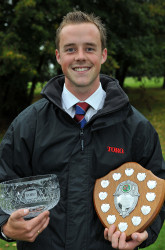 A student from Askham Bryan College in York has beaten around 200 competitors from across Britain and Europe to be named as the 2010 Toro Student Greenkeeper of the Year.

He is currently head greenkeeper at Horsforth Golf Club, stepping into the role full-time in July after initially providing interim cover when the former incumbent suffered an accident.

Andrew first began his studies at Askham Bryan three years ago before spending a year in the United States, training and working at the Liberty National Golf Club in New York and Augusta National in Georgia.

He says winning the competition, organised by the British & International Golf Greenkeepers Association and sponsored by leading turf machinery manufacturer Toro, was "an incredible honour".

"It was a massive shock as, although I believed I could win, the competition included some of the highest-calibre greenkeepers from top courses. To be named as the overall winner is fantastic - and a real honour, given the standard of those I was up against.

"Being a greenkeeper is all I've ever wanted to do and I've really appreciated the support of both Horsforth Golf Club during the competition and my lecturers at Askham Bryan during my studies. My ultimate ambition is to host a major tournament - I'd love to be superintendant at a top course for the British Open."

Dave Campbell, Section Leader for Horticulture at Askham Bryan, said: "We're incredibly proud that one of our students has won such a prestigious award - the Toro Student Greenkeeper Competition is renowned throughout the golfing industry.

"Andrew completed both his Level 2 and Level 3 NVQs in a quarter of the usual time - he is completely dedicated to his career and thoroughly deserves his success. We believe we offer some of the finest facilities for turf management studies in the region, so it's a great testament to Askham Bryan, too."

As one of eight finalists, Andrew had to complete a written test, giving an overview of three holes at the Aldwark Manor Golf Course, near Linton-on-Ouse, North Yorkshire, with suggestions for possible improvements. He also underwent a gruelling 50-minute interview with a panel of judges.

For his prize, Andrew wins an eight-week trip to the United States which includes a six-week course in turf management at the University of Massachusetts.

Askham Bryan is one of the country's leading land-based colleges, providing education and training at all levels from introductory courses for school leavers up to Honours degrees. Visit the website at www.askham-bryan.ac.uk for more details.