Five former students, who cut a swathe 50 years ago when they rode a Ransomes Matador mower non-stop from Edinburgh to London's Hyde Park in just four days, got back together recently to commemorate their epic journey. Ransomes Jacobsen, based on Ransomes Europark in Ipswich, who still manufacture the Matador, hosted a two-day event to help them celebrate their remarkable achievement.

Back in 1959, Tom Hudson, Mike Smith, Mike Savage, Hugh Tansley and John Wilson, who were students at Hatfield Technical College and former employees of the De Havilland Aircraft Company, wanted to test the reliability of small petrol engines, so they hatched a plot to see if they could drive a small petrol-engined mower from Edinburgh to London.

They contacted Ransomes, Sims and Jeffries, the forerunner of today's Ransomes Jacobsen company, and Mark Grimwade was tasked with assisting the students. The mower was slightly modified with a larger sump added to the 288cc Villiers engine to provide enough lubrication for the non-stop 400 mile trip. Mark and a team of four apprentices tested a couple of prototypes, running them around Ipswich for 90 hours, which was the estimated time it would take to travel at 3 mph down the A68 and A1.

With the trials successfully completed, the date for Operation Matador was set for Easter 1959. The five students left Edinburgh Castle with Tom Hudson driving the first leg and the others crammed into a Bedford Dormobile, which was to be their mobile home for the next four days. The gift of a haggis was placed in the grass box of the mower to be presented to the Keeper of the Royal Parks in London - a Scotsman - at the end of the journey. 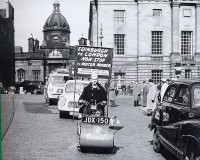 Four days and three nights after they left Edinburgh, the students rode into Hyde Park to be greeted by a high-powered reception committee of Royal Park's staff, Ransomes top management and dealer representatives, a BBC television crew and the press. The haggis was handed over to the Keeper of the Royal Parks and a ceremonial strip of Hyde Park grass was mown to Ransomes perfection.

Mike Smith contacted Ransomes Jacobsen and they readily agreed to support the reunion and a plan was hatched help the team members celebrate their remarkable achievement of 50 years ago.

Earlier this summer, the Operation Matador team, all now in their early 70s, arrived at the College Lane Campus of the University of Hertfordshire in St Albans, with a replica of the Ransomes Matador mower complete with the number plate and signage of 50 years past. There they were met by old friends and former students before presenting Vice Chancellor Professor Tim Wilson with a memento of their journey.

They then travelled to Hyde Park, where they re-enacted the completion of their journey by mowing a ceremonial strip of grass and presenting a haggis and personal memento the Assistant Parks Manager, David Jordan. Later that day they returned to Ipswich for a nostalgic and celebratory dinner.

The following morning they visited Ipswich Town's Portman Road stadium, where they met head groundsman Alan Ferguson, who uses the latest version of the Ransomes Matador to maintain the pitch. Next stop was a tour of Ransomes Jacobsen's European headquarters and manufacturing plant followed by a round of golf on the company's three-hole golf course and a buffet lunch with the Directors and other staff.

David Withers, Managing Director of Ransomes Jacobsen said,
"We are absolutely delighted to be in a position to help the Operation Matador team celebrate their epic achievement of 50 years ago. It would be difficult to replicate what they achieved, even today, and it was a remarkable feat.

"It says a lot about the quality of the equipment we built back then; a tradition that we carry on today. After 50 years, I'm delighted that all of the team are still with us; that we're still producing quality turf care equipment in Ipswich - and we're still producing the Matador mower, albeit with some technological enhancements from the original!

"The team here at Ipswich really enjoyed meeting the guys and I hope we contributed to a very happy and nostalgic reunion."