by External source
in Conservation & Ecology
on 27 Oct 2013 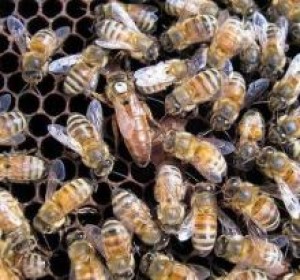 A team of researchers with members from several universities in Italy has found that exposure to the common pesticide clothianidin can cause immunity problems in honeybees, leading to an increased risk of dying from common viral infections.

In their paper published in Proceedings of the National Academy of Sciences, the researchers found that exposure to clothianidin resulted in an increase in a family of proteins that inhibit the development of other proteins that are involved in the immune process.

Headlines over the past couple of years have made it very clear that something is causing honeybees to die in unexplained ways. Whole colonies suddenly die, with no clear explanation. Now known as Colony Collapse Disorder (CCD), the problem has reached the point of panic as honeybees are the chief means for pollination of crops around the world.

At this point, scientists suspect that the disorder involves something that is causing the immune system in the bees to break down, leaving them unable to fight off bacteria and viruses.

In this new effort, the research team contends that they've found one of the missing links-a single pesticide that causes bees exposed to it, to develop immunity problems.

In their lab, the researchers started by isolating a family of proteins (called LRR) that are similar to other proteins found in other animals that are known to regulate immune response-specifically, its presence, they found, causes another protein (NF-κB) directly involved in immune response, to be inhibited.

Next, they exposed honeybees to the pesticide clothianidin and subsequently measured gene expression and protein levels in them. They found an increase in the expression of the gene responsible for LRR levels and lowered levels of NF-κB, which the researchers claim, suggests a direct link between exposure to the toxin and a damaged immune system.

The researchers ran the same tests on bees exposed to another pesticide- chlorpyriphos-and found no ill effects, which they suggest means CCD might be caused by one or a just a few pesticides.

Next, the researchers exposed the bees that had been exposed to clothianidin to a pathogen called the deformed wing virus. Normally, healthy bees show resistance to the virus and are not impacted by it.

After exposure to clothianidin, however, the researchers found the virus was able to reproduce in the bees, suggesting the bee's immune response had been compromised.