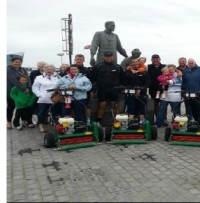 After four days of pushing three Ransomes pedestrain mowers one hundred and thirty plus miles, Tim Johnson and his team finally crossed the finish line after their inaugural Port to Port Challenge.

A great achievement in many ways, not only providing a personal physical challenge for all those taking part, it also raised much needed funds for the Help the Heroes campaign whilst, at the same time, increasing the profile of our turf grass industry.

Stuart Yarwood was keen to point out how tough it was physically and mentally, especially the last seven miles which took over two hours to complete. He also said the whole experience of organising, co-opting support and overseeing the logistics of the event was a great learning curve and whetted the appetite for another challenge next year.

Stuart Walkinshaw's final comments were, "gathering my thoughts in the car on the way home, and there is nothing I can say that would even give you an insight into the mental strain or the different emotional challenges that I have encountered. The physical challenge was hard, but something you strangely got used to. I had a great team around me that had different strengths and abilities and they were used to a maximum. Tim Johnson, whose idea it was, managed his team well; and Mr Stuart Yarwood, course manager of Lymm G C, well if you read his articles in any magazine and think you know what he's about, can I just say you don't. Thank you to all my team members who pulled me through, and it was a pleasure to know you and walk alongside you. My greatest respect to you all and I am honoured to now call you my friends."

Tim Johnson was also keen to say a thank you to the team and others, "through the ups and downs we've stuck together and had an amazing time. Everyone has helped everyone, and it's been amazing to be a part of it. I must say thank you to everyone who has helped us - goodwill messages, sponsorship, food and water donations, help with accommodation and equipment supply. All of you have helped in a massive way and it's made the success of the walk possible. Last, but no means least, my dad,he's been the oil that's kept everything going, what a man. Without him who knows how it would have gone. Sorry if I've forgotten anyone."

The team would also like to thank Ransomes for their generosity and being keen to support the challenge, with a special thank you to Gina Putnam along and all the others who found the time to support the team during the four days of their challenge.

I am sure we will hear more about their exploits in the coming weeks, backed up with a full gripping account in the next Pitchcare Magazine

Anybody interested in donating money for this charity event can do so by clicking on the following Link:- http://www.bmycharity.com/TimJohnson 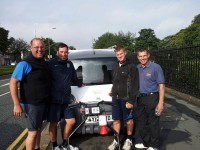 About Help for Heroes

The charity Help for Heroes was launched in October 2007 in order to provide direct, practical support to wounded injured and sick Service personnel and their families. All the funds raised to date are either allocated or spent on the direct, practical support of those wounded in the current conflicts. To date, H4H has funded a variety of projects including the £8m Rehabilitation Complex at Headley Court, a new £3.5m treatment centre for Combat Stress, adaptive adventure training through the Battle Back programme and the creation of a £6m Quick Reaction Fund to support individuals in need