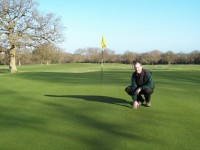 Trials of a new oxygen generator have helped bring a prestigious, Hampshire golf course through one of the hardest winters in recent memory.

Tylney Park golf club, 200 acres of privately owned estate at Hook near Basingstoke suffered 20 inches of snow from the end of December to the end of January followed by nearly 9 inches of rain to the end of March. "For Hampshire this was unusual to say the least," says Course Manager Darren Woodward, who has been at the club since 2006. "The greens have stood up vey well. They've got a nice, dry firm surface and considering the weather we've had they're not holding much water in the top ¾ to 1 inch."

Keen to get more oxygen into his Fescue dominated USGA greens; Darren was one of the first UK turf managers to use Oxy-Rush, the new soil stimulant that increases O2 levels accelerating the activity of beneficial microbes. He applied the product to all 18 greens at the end of April last year, following hollow coring, over seeding and top dressing. Proof that Oxy-Rush was working came within a week of application. "We have a monthly fertiliser programme during the growing season," he continues. "We'd applied fertiliser in March and the greens were due another application that week, but having used Oxy-Rush we found that they didn't need feeding for another two weeks. I concluded that the microbes were working well."

Darren repeated his application of Oxy-Rush in August, again following hollow coring and kept up his aeration regime - monthly solid tining with 6mm tines during the summer and 9mm tines during the winter - using Pervade penetrant five times over winter to keep excess water off his greens. David Snowden, MD of Agronomic Services, who visited Tylney Park in the middle of March, says that he personally hasn't come across firmer, better looking greens this year. "I took out my knife and cut a sample slice out of one of them and the soil smelt sweet," he reports. "I could also see good, strong rooting. A true credit to Darren and his teams' hard work"

The Course Manager is also happy with the result. "This year I'll be using Oxy-Rush again but only on my six worst greens that are in a shaded position and don't get as much air or sunlight as the others," he explains. "David has recommended that I apply the oxygen generator at the end of May and I might tank mix it with Pervade. We take regular soil samples, every three months, ½ inch wide and 8 to 10 inches deep and I'll be keeping a close eye on fibrous layers. They're reducing and I want to keep it that way."