More than just an Oak Problem

Imagine Tiger Woods plotting his way around Augusta, surrounded not by a blaze of rhododendrons and azaleas but by a few shrivelled brown leaves and dead twigs!

Whilst this will probably never happen, it illustrates the potential threat posed by a plant disease known commonly in the USA as 'Sudden Oak Death'

As we shall see, the organism causing Sudden Oak Death disease can attack more than just oak trees and could, potentially, affect many of the trees and shrubs that provide such an important backdrop to many of our golf courses and parks sports pitches.

Let's start at the beginning. Since 1995, thousands of tanoaks (Lithocarpus densiflorus) and large numbers of other native American oaks (Quercus spp.) have been dying in coastal California and parts of Oregon. The problem was given the name 'Sudden Oak Death', and was eventually found to be caused by a microscopic, fungus-like organism called Phytophthora ramorum (from hereon abbreviated to P. ramorum). 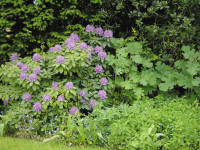 Phytophthora species have been around for centuries and have a worldwide distribution; they often cause root and stem base rots but, occasionally, affect the aerial parts of plants. For example, potato blight, the disease that caused the Irish potato famine in the nineteenth century, is caused by a species of Phytophthora.

P. ramorum does not attack the roots of the trees, but causes death of the bark towards the base of the trunk. There is often oozing or 'bleeding' of brownish sap from the affected areas of the bark, and this symptom type is commonly known as a bleeding canker. Affected trees lose vigour and, if the bark death girdles the stem, will eventually die. Depending on the species of tree the leaves may also develop brown, dead patches where they have been infected by the pathogen.

Plant health authorities in other parts of the world were soon alerted to the problems caused by P. ramorum in the USA, and began checking for the disease. The potential damage that the disease could cause to oak trees in the UK was taken very seriously, as memories of the devastation caused to English elms by Dutch elm disease were still very fresh.

Inspectors from the UK plant health authorities began to check for the disease on nurseries and garden centres, and amenity sites such as parks and gardens. UK inspections began in 2001 and it didn't take long to find P. ramorum here. In fact, there have now been several hundred findings covering most of the UK, and the disease has also been found in many countries of mainland Europe including France, Germany and the Netherlands. 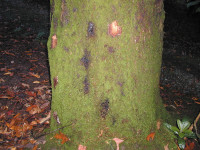 The situation with P. ramorum in the UK and the rest of Europe has so far been rather different to that in the USA. The vast majority of findings have been on nurseries and, rather than oak trees, the most common host plants have been ornamental shrubs, particularly Rhododendron and Viburnum species. The disease has been found on a large number of other shrubs, including camellia, Pieris, Kalmia, Hamamelis, and Leucothoe.

The symptoms caused by P. ramorum on shrubs vary according to the plant species, but again it is the above ground parts of the plant that are attacked. On rhododendron the most common symptom is a brown lesion spreading down the middle of the leaf, with the disease eventually working its way down the leaf stalk and into the branch or stem to affect the bark. If the bark is girdled, then death of branches or even the whole plant may occur.

On viburnum, the infection is most commonly seen at the base of the stem - once again if the lesion girdles the stem then wilting and death of the plant follows.

Because the disease was being found on such a range of plants in Europe, the common name of 'Sudden Oak Death' seemed somewhat inappropriate. It was therefore given the names 'ramorum dieback' or 'ramorum leaf blight', depending on the symptoms caused. P. ramorum has the status of a 'Notifiable Disease' meaning that all suspect cases must be reported to the relevant plant health authority, who will take statutory action to try and eradicate it.

In addition to the nursery findings, cases of the disease have also been found quite frequently on amenity sites, particularly in the west and southwest where the higher annual rainfall is favourable for the pathogen. The vast majority of these cases have involved the wild rhododendron, Rhododendron ponticum, the purple flowers of which are such a common sight in late spring and early summer. If the disease were confined to this plant there would be no great loss.

Whilst its flowers may look pretty for a few weeks, wild rhododendron is a thug, threatening woodland ecosystems by preventing any other plants from growing beneath it.

So what of the threat to UK oaks from P. ramorum? The Forestry Commission is still undertaking research, but it appears that our native oak species (sessile and pedunculate oak) are much more resistant to the disease than their American cousins. This is not to say that trees have not been found affected by the disease - there have been cases on beech, horse chestnut, sweet chestnut and a number of non-native oak species. In most of these outbreaks the symptoms have been bleeding cankers similar to those found on the trees in America and, in almost all cases, the disease has spread to the tree from heavily infected plants of Rhododendron ponticum growing around it.

P. ramorum spreads by means of microscopic spores which, in wet conditions, are splashed from affected onto healthy plant tissue and germinate to create new infections. Sometimes large numbers of these spores are produced on infected rhododendron leaves.

At present, our knowledge of P. ramorum is far from complete. Whilst the research continues, the disease is still regarded as an important threat to UK woodland and heathland (common heathland plants such as bilberry are also susceptible). Fortunately, the numbers of confirmed cases of the disease in the UK are beginning to fall, as statutory action by the plant health authorities on nursery and amenity outbreaks starts to take effect. Anyone with susceptible plants in their care should remain vigilant, however, and should report any suspicious symptoms promptly.

During inspections in 2003, plants of rhododendron and beech were found in southwest England with symptoms suggestive of P. ramorum. Laboratory
tests, however, showed that a different Phytophthora species was responsible.

This species was new to science, and has been given the name Phytophthora kernoviae (after Kernow, the dialect name for Cornwall, where the
organism was first found). Where the organism came from is unknown, but it is regarded as posing a threat similar to P. ramorum. It seems to be more
aggressive to rhododendron, and has also been found causing bleeding cankers on a couple of native oak trees.

Phytophthora kernoviae is also a Notifiable Disease, and suspected cases must be reported to the plant health authorities. So far, cases of this organism outside of nurseries have remained confined to a few sites in southwest England and south Wales.


What to do if you find Suspect Symptoms

Firstly, bear in mind that dieback of shrubs and bleeding cankers on trees can have a number of other causes. These include drought, and attack by
other pests and diseases, including some other Phytophthora species that have been in the UK for many years. However, if you find symptoms that you
believe could be due to P. ramorum or P. kernoviae you must report them to the relevant plant health authority (DEFRA in England and Wales, SASA in
Scotland).

Contact details, together with further information on the disease and excellent pictures of symptoms, can be found at :- www.defra.gov.uk/planth/pestnote/sudden.htm