23 Summer in the City

Summer in the City

Following our final league game on May 15th, we crammed 8 corporate games into 48 hours. The reason for this was that we were holding the FA Summer Tournament with the national teams of England, Iceland and Japan all competing as part of England's preparations for Euro 2004. Straight after the last corporate game, Mallinsons of Ormskirk came in and carried out a scarifying of the pitch with the Koro, using scarifying blades to a depth of 5mm. 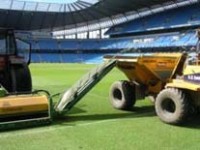 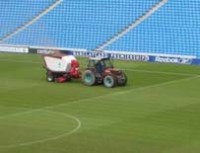 The pitch was then cleaned up with their TM5 which picked up the debris that had fallen onto the surface during the operation. On the Friday, we fertilised the pitch with 15 bags of 12-6-6 granular fertiliser and hoped for a nice green colour in time for the tournament.

Five days later and we walked in to work to what was a pattern of green and yellow bands across the pitch. Upon closer inspection we found bits of stones in the surface which could have only have come in with the fertiliser and partially blocked the spreader whilst in operation. Whilst at the time the feed seemed to be coming out evenly, it was now apparent that this was not the case. 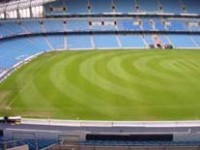 With the colour slowly coming back, Iceland decided they wanted to train two days before the game instead of the day before. They chose to do this at 6pm on the Friday, which wasn't ideal but with rain forecast for the following day and Japan training on Saturday morning, it actually worked out well in the end. As part of the tournament, and in line with UEFA guidelines, they were allowed an hour each - Iceland had 1 hour 35 minutes and Japan 1 hour 20. 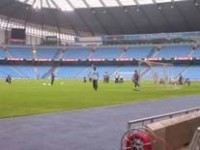 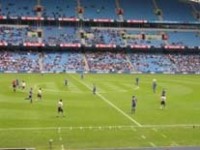 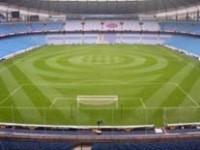 The pattern was easy to do with the Toro 2000 that we have, taking just 1 ¼ hours to cut each time. As with Sunday's game, the managers differed on whether the pitch was to be watered at half time so, as they didn't agree, the pitch dried up sooner than we would have liked. Following a 1-1 draw, we divotted for ½ an hour as England warmed down for 25 minutes after the game. For the rest of the week no-one else trained on the pitch until Friday morning when Iceland had another session. Initially we had refused the request to train as they wanted to come at 4pm but, after agreeing on one hour only at 10am, they accepted. They would have trained for longer, despite saying they were only on for an hour, had the irrigation not mysteriously came on and disturbed their session. 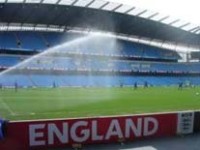 Following this we divotted and cut the pitch before heavily watering it before the following day's game.

On Saturday the pitch was cut, marked and watered for three hours as per the England team's requirements, with the option to water at half time also agreed by the two managers. As it happened, the England squad stayed out at half time so we couldn't water anyway, but with Mallinsons due back on the Monday that wasn't such a bad thing. The game again went well and the pitch played well also, considering it was the 6th day out of the last 8 that one of the three national teams had used it for training or for a game. It is also worth noting that for the last half hour England replace Paul Robinson with Ian Walker who left his own mark on the pitch in the form of his own mark on the six yard line. After the game the goals came down as England warmed down for around twenty minutes, in readiness for Sunday… 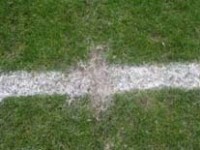 On Sunday the pitch was solid tined to a depth of 100mm at 75mm centres, this was done by ourselves after a quick cut with the Toro.

Gary and Matt from Mallinsons arrived on the Monday to scarify the pitch twice with the Koro and then remove any surface debris with the Richard Long scarifier/collector, so that in effect the total amount of times the pitch had been scarified in the last fortnight was four. 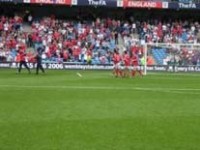 Mallinsons came back after we had done this and reseeded the pitch using the Charterhouse Vreedo machine, sowing 8 bags of Barenbrugs Bar7 into the whole surface. Following this the pitch had a well deserved watering!!!

Just three days after the renovation work was completed, the stadium is to be converted into one of Europe's biggest outdoor stadium venues as we play host to The Red Hot Chilli Peppers and 58,000 fans on June 18th, but that is another story…….