In the thirty years I have worked in the turf industry, maintenance requirements carried out on golf courses have remained fairly constant, but the methods to achieve the results has changed and, in some instances, quite radically.

Today's course managers are under constant pressure to produce firm, true and fast greens all year round, with minimal disruption to the members playing times.
'Drive for show putt for dough' springs to mind. Like it or not, every golf course is judged on the standard of its greens.

On visiting many different golf courses on a daily basis, the same topic always pops up: green speed. So, for my summer turf tips, I have picked four essential processes which I feel go a long way to helping achieve true, firm and fast greens, with little or no disruption to the playing surfaces - At one time this was a very controversial subject. Going back fifteen years, greenkeepers were much more apprehensive about rolling than they are today. At that time, it was considered to cause compaction and bruising of the turf. Today, it is the norm to roll, particularly as golfers now have high expectations of faster green speeds. Rolling is proven to produce healthier turf and, with higher heights of cut and moisture reduction, fewer diseases are evident.

I frequently get asked 'is rolling right for us?' and 'how often should we roll?'. No two golf clubs are the same; it will depend on the weather, type of grass, green construction, golfer's expectations and finance. Although many clubs report less wear and tear on the greens machine, especially if you roll after topdressing. This, combined with less cutting, helps to reduce the need for potentially expensive reel and bed knife sharpening. 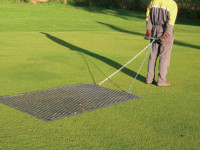 Modern ride on rollers feature a three true level roller effect. This has a ride-over action on slight hollows and allows level areas to be ironed whilst low areas are left, so the playing surface is progressively rolled. This is how you get the ironing effect.

An ideal tool for rubbing in topdressing, removal of dew and clipping dispersal. The rubber mats are less abrasive on fine turf so, in turn, reduce bruising to the plant leaf. The major benefit is that rubber does not wear out.

Brushing with a ride on triple mower Regular brushing promotes a vertical sward. This, in turn, improves the quality of cut and, subsequently, improves ball roll and speed. Regular brushing can also decrease the frequency of verticutting, resulting in a further reduction in maintenance costs and man hours.

Spinner allows you to topdress little and often

The days of applying a one-off heavy dressing with a drop dresser are rapidly becoming a thing of the past. Time is expensive, and anything which reduces the number of passes required to complete the task is an enormous benefit. Compaction created, due to the frequent number of runs needed to dress a green, is another issue which can be avoided by using a spinner instead of a drop method. Spinner topdressers have up to a thirteen metre throw pattern, so an average size green will only take two to three passes to complete. This means you can reduce the time to do eighteen greens by up to a third.

Spinner topdressers are designed to throw the material into the grass sward and not on top. This, again, is very beneficial on cutting down on mower sharpening and saving on labour time needed for brushing or matting in.