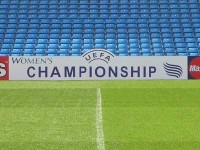 In the last year we have hosted the Red Hot Chili Peppers, the England FA Summer Tournament, the rugby league tri nations game between Great Britain and Australia, so it was no surprise really to be chosen to host the opening game of the Women's Euro 2005 tournament with England playing Finland here on the 5th June. 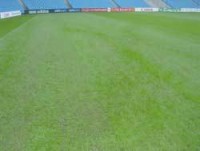 Our preparations started once our end of season renovation work was completed, and we quite literally started with a blank canvas as almost the grass at this time had been removed leaving just the Desso Grassmaster fibres present. The following week was used by ourselves to do all the routine machine maintenance tasks such as greasing, oil checks etc whilst the new seed was germinating.

Once germination was evident, we fertilised with an autumn/winter feed of 18 x 20kgs of 6-0-12 so that we didn't have a flush of growth leading up to the five concerts planned for the three weeks after the game. After the May bank holiday weekend, we cut with the Dennis, as this is light and won't damage the grass as much as the heavier Mastiff. Height of cut was set at 26mm, brought up from the end of season when we were cutting at 20mm. Once the surface was firmed up, the following day was spent cutting with the Toro Proline pedestrian rotary mowers to 'top off' the grass to a more manageable level. At the same time we removed the mobile light rig that had been on for the previous ten days from the south west corner-the difference was clearly evident…. 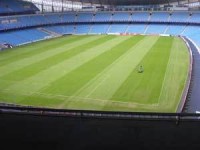 Rules of the competition allow both teams to train on the pitch the day before, and they did so on the Saturday - Finland at 11am and England at 7pm. To minimise damage on the goalmouths, we didn't put the match goals up, and used just the portables, as it seemed better to give them two goals to shoot in rather than four, and it also meant we had greater control by putting them at the side for part of the sessions.

In between and after the sessions we knocked back any damage there was in readiness for the game the next day; the pitch was also cut between the sessions. During England's session the heavens opened, round 5mm of rain fell in that hour, and it became quite obvious where they had been warming up.

The forecast we had had on the Saturday morning was for showers, and 10-15mm of rain on the Sunday afternoon onwards. Given the inconsistency of the forecasts all week, we opened up the headlands around the pitch with the 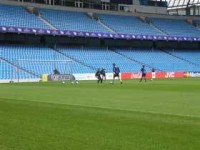 As I said, with the regular cutting, the sward had stared to thicken up, though up in the television gantry the pitch still looked very thin. On Sunday it had its final cut and marking out prior to the evening kick-off, watering as we saw fit. Interestingly, we were not allowed to water four hours before kick off or at half time, again rules of the tournament.

The 100 strong choir and the flag bearers for the opening ceremony did a run through in the afternoon as well, with little damage considering the amount of people there was on such a young and immature sward.

Before the game, there was also 500 cheerleaders on the pitch, they were not so kind, flattening the new grass into the rootzone with no real chance of us getting these areas back without reseeding. 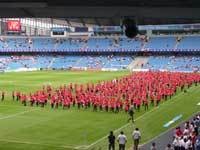 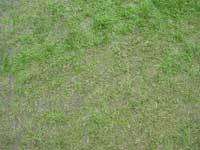 The pitch played well and we divotted after the game, as we pondered the next challenge…..the concerts!

Almost 300,000 people will pass through the turnstiles for the 5 concerts and around 140,000 of them will be on the pitch. Following this we have just four weeks for ourselves, our contractors Mallinsons, and our consultants (PSD) to get the pitch up and running for a friendly around the 6/7/8th August.

Keeps us busy I suppose!