by External source
in Industry News
on 25 Sep 2014 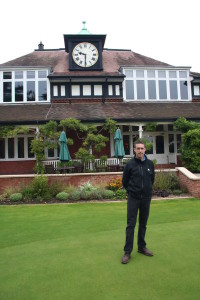 Sunningdale Golf Club is pleased to announce the appointment of Jamie Wilson (44) to the above position, following an extensive recruitment programme.

Following graduation from Myerscough College in Preston with an HND in Turfgrass Science, Jamie continued his studies at Ohio State University. His internship was spent at the Bay Hill Club in Florida, where he worked on the Bay Hill Invitational and U.S. Open Qualifying.

Jamie developed his career further at the Belfry, where he worked on three Benson and Hedges International Opens and he headed up the greens team for the 2002 Ryder Cup.

He gained further championship experience by preparing the Dukes Course in St. Andrews for the Scottish Amateur Championship in 2003 and the Aegean Airlines Tournament, Crete, in 2006.

Jamie joined Sunningdale as Deputy Courses Manager in 2007. Having started his golfing career as an Assistant Pro at Bristol and Clifton G.C., Jamie currently plays from a handicap of 5. In his leisure time he enjoys fishing, football and riding motorcycles.