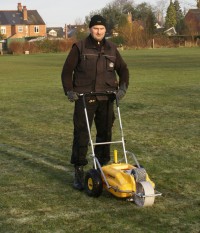 Supaturf has managed to re-invent the wheel and make line marking a pleasure, according to Stuart Mottershaw, Grounds Maintenance Supervisor for Burbage Parish Council in Leicestershire.

He made the comment after taking delivery of a new Briteliner Arrow line marking machine from Supaturf.

Burbage is England's second biggest village and, in addition to several parks, Stuart has responsibility for maintaining six sports pitches. "Supaturf has managed to re-invent the wheel with this machine and, by going back to basics, has made line marking quite pleasurable rather than something I used to dread," he said.

"We took delivery of the machine on a Wednesday and straight out of the box it looked impressive. It took, literally, just two minutes to get it ready to work.

"We used it for the first time the following Friday with Supaturf's SupaStadia AF line marking liquid mixed at 5:1 and I have to say the line quality was outstanding - by far the brightest lines we have managed to achieve to date."

Launched last year, the Briteliner Arrow is a completely re-engineered transfer-wheel line marker, featuring a host of design modifications which bring this traditional technology right up to date.

"I've used old-fashioned box markers in the past and I hated them," said Stuart. "But the new machine is completely different. Its balance is just right and it is easy to push. Even with the scraper bar on the front wheel there is no drag and, because the wheel is in contact with the ground all the time, it is easier to keep the lines straight.

Stuart is also very impressed by the economic advantages the Arrow offers. "We used to use two spray markers," he said. "and it took about 45 litres of marking liquid mixed at 10:1 to mark our six pitches.

"I did five of our pitches on the first Friday on just one Briteliner Arrow tank - about 22 litres of marking liquid - and the only reason I didn't do the sixth was because it didn't need marking.

"I also did it on my own in about the same time it would have taken two of us using the spray markers and, to top it all off, cleaning the machine was as easy as pie. There's nothing to block up or dry out, so cleaning time is cut by at least half."

Possibly the greatest confirmation that the new machine was a winner was the comment Stuart received from a member of the public. "I was marking out the rugby field when this gentleman came up and said how good the lines looked. That's never happened before.

"Well done Supaturf. It's a great piece of kit and I only wish you had come up with it years ago."

For further information about the Briteliner Arrow or any other Supaturf product call 01530 510060 or visit us at ww.supaturf.co.uk