Cardiff City Stadium was recently host to the Super Cup Final between Seville and Real Madrid. In order for the pitch to be in tip-top condition Head Groundsman Phill Williams called for a Clegg hammer reading. On finding it registering as high as 116, something needed to be done - enter a Redexim Verti-Drain™ 7626. 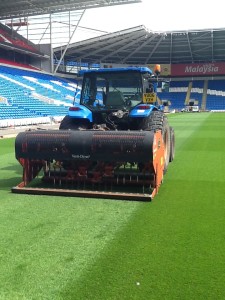 Home of Cardiff City Football Club, the stadium is used for both high profile football matches and events. It is of Desso construction, virtually 100% sand, and tends to become a bit firm. Phill Williams has been at the stadium since its construction in 2009; previously Groundsman at Ninian Park.

"I called in John Morgan of Keith Morgan Mowers" explained Phill, "my relationship with him goes back to his father and spans over 30 years. John chose a Verti-Drain™ 7626 with 1" (25mm) tines to get a better tine pattern and uniform decompaction. The kick was turned right down to a 125x125mm pattern at 200mm deep - previous experience has led me to prefer no kick and instead to go straight in and out as any surface disruption would have been too near to the Super Cup. After decompaction a Clegg hammer reading of 56 (average) was attained."

Phill was full of confidence with the pitch for the Super Cup. The holes had closed up but, even after a few downpours since the work was carried out, passage of water was taking place showing aeration was in action. They didn't want to have a situation where water would prohibit the game. Some friendly matches were scheduled in before the big match and the pitch played well, with only complementary comments from those using it. 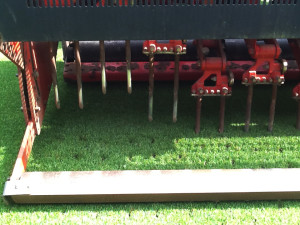 Generally throughout the season Verti-Draining is carried out three times, which is normally sufficient. John Morgan Verti-Drains in the winter too, but will go down to a 19 mm tines as the grass starts to thin out.

Clegg hammer testing is used to test the firmness and shock absorption of a surface. It records the deceleration of a mass dropped at an average height, measured in CIV units. This is important as the surface cannot be too firm, in order to aid the bounce of the ball and to prevent injury.

Phill is a great advocate of its use and carries out 15 tests on various areas of the pitch. One example was in the goal mouth where the reading went from 134 to 93 after Verti-Draining.