by Scott MacCallum
in Industry News
on 07 Jul 2013 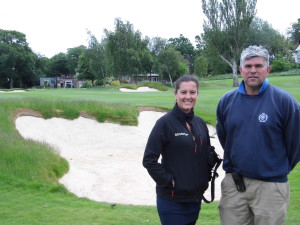 The much used BBC aerial shot of Wimbledon gives a superb view of Wimbledon Park Golf Club across the road from the All England Club, which is used for car parking, hospitality and queuing.

The spectacular view also highlights the wonderful bunkering which has been built and designed within the last 18 months and which has turned a Wimbledon Park negative into a positive with a set of new bunkers of which any golf club would be justifiably proud.

The bunkers were designed by golf course architect, Tim Lobb, and constructed by Profusion Enviromental, using the unique Blinder Bunker system, a rubberised, porous compound which allows free drainage but prevents any bunker contamination rising to the surface and causing injury and potential damage to golfers and their equipment.

"Bunkers were a real issue for the golf club but having Installed Blinder we have found that they have been absolutely terrific over the period. No drainage issues or contamination issues and the members love the consistency," explained Course Manager, Dave Langheim.

"From a maintenance perspective we scarify once a year and cut regularly. The lack of on-going maintenance has freed up the time to enable us to rake them every day which enhances the presentation of the bunkers and ensures that we keep sand up in the faces as members who rake tend to the sand down exposing the faces," he said.

"We are delighted that the Blinder Bunkers have made such an impact at Wimbledon Park we have enjoyed seeing the wonderful aerial pictures of them during the Wimbledon coverage," said Blinder Director, Penny Long.