accepting a new job as the Senior Groundsperson at Townsville's premier stadium, the Dairy Farmers Stadium, you're going to want to make your mark and produce a surface people talk about for all the right reasons. What if after only 3 days in the job, 4,000 tonnes of sand got dumped over your beautiful surface? Then a bunch of crazy supercross riders tore around the stadium! With only a few weeks remaining to get the ground back in shape for the Cowboy's training for the upcoming NRL season, this is the challenge that Bruce Fouracre tackled following his move from the S.C.G.

After working at the Sydney Cricket Ground since 1994, I moved to Townsville after accepting the position of "Senior Groundsperson" of Dairy Farmers Stadium.

I was looking forward to the challenge and driven by the goal of making Dairy Farmers Stadium one of the best grounds for sports played on rectangular fields, (League, Union and Soccer) in Australia. Three days after I commenced work, the Australasian Supercross Championships "Bump-in" began. The first ste 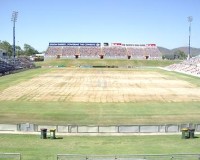 After starting the preparation on Wednesday 17 November, the track was complete and ready to be raced on the following Saturday. On the day of the event the temperature reached 35°C and a thunderstorm on the night made the track very slippery and muddy.

The day after the event the temperature was 37°C and the soil was removed by the loaders and bobcats and the boards and fabric were taken up. Upon viewing the turf it appeared scorched and very badly yellowed by the hot conditions.

The ground was watered immediately and this irrigation continued throughout the night. The next day it was apparent that the turf was in a bad state but, upon closer inspection of the grass, it was revealed that some green shoots st 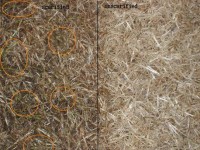 ill existed under the layer of thatch and mat. The decision was made to heavily scarify the whole ground to expose these green shoots to much needed sunlight and this would also allow any nutrients and water to become more readily available. After this scarification took place these shoots became increasingly apparent and we were reasonably confident that the ground would recover.

The deadline for the recommencement of usage for the ground was Monday 5 January, making it a tight schedule with little room for error.

The ground was then verti-drained using 1/2" solid tynes and top dressed with a sandy soil. My initial fertiliser applications were high in Nitrogen and then regular applications of organic fertilisers (kelp based products, liquid blood and bone and liquid worm castings) were introduced to try and raise the levels of organic matter in the soil .The ground responded well to these treatments and two weeks after the event the ground was on its way to making a full recovery.

We are happy with the transformation of the ground and our expectations for the quality of the Dairy Farmers Stadium surface for coming NRL season are extremely high.


The Dairy Farmers Stadium is located in Townsville, North Queensland. It is the home ground of the North Queensland Cowboys NRL Team. Willows Sports Complex, which includes Dairy Farmers Stadium was opened in 1994 and covers 16.83 hectares. The Stadium was a trotting track, before 1994. The stadium had extensions done to the Eastern Grandstand that were completed in early 2006 raising the grounds capacity to 25,000.

The training facilities at Dairy Farmers are among the best in the National Rugby League.

The ground has a lack of undercover seating this is due to Townsville's climate, and the designers of the stadium thought a roof on the ground during the rugby season was unnecessary.