by External source
in Industry News
on 13 Jan 2014

0 Support The Hard Road to Harrogate! 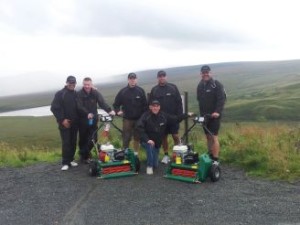 Half a dozen brave greenkeepers are preparing to undertake a gruelling charity challenge with a difference - pushing mowers over 170 miles across England in January.

The team of six BIGGA members are used to braving the depths of the ice-cold British winter, but this time they will be battling the elements while pushing hand mowers from Ransomes Jacobsen's Ipswich HQ to Harrogate in time for BTME 2014.

It's all in aid of Scotty's Little Soldiers - a charity that supports the families of men and women killed in action while serving in the British Armed Forces. In August 2012, the group of turf professionals completed the 'Port to Port' challenge from Liverpool to Hull, also for charity.

But this time the weather conditions will be far tougher and large portions of the walk will be spent in darkness. Tim Johnson, greenkeeper at Wilmslow Golf Club, came up with the unusual fundraising scheme.

He said: "Lots of people these days do charity cycles and marathons, which is great, but we wanted to do something very unusual that is memorable and is also related to the turf industry.

"One morning I was cutting the greens at Wilmslow and I came up with the idea of some sort of mower-based charity challenge. A few friends and family agreed to support us and it was on.

"This year will be much tougher. The route is 80 miles longer, with less hours of daylight and in the depths of winter. We are expecting snow, sleet, gales and sideways rain. Ransomes Jacobsen are supporting us and we're hoping to attract other industry support as well."

To donate and read the full story click here