Sport surfaces are designed and installed with various factors in mind: cost, maintenance, durability, aesthetics, etc. Undeniably one of the most important factors is the playability of the surface, or the interaction of the surface with the athlete. It is commonly believed that sport surfaces can influence both injuries and performance.

Player surface interaction rarely receives the attention it deserves. This is likely due to several factors. One is that this interaction can be complex so researchers are still trying to understand it while a second is the shortage of communication between researchers and practitioners. This article tries to address this shortage by presenting some current concepts of player surface interaction related to injury and performance.

A variety of different factors of sport surfaces have been proposed to be associated with the development of sports injuries:

• non-uniformity of their mechanical characteristics,
• too high or too low friction between the surface and the shoe,
• lack of surface deformation or high surface stiffness.

Most of the proposed associations between surface characteristics and related injuries are not well supported by experimental evidence. In the early days of sport surface research, a relationship between sport injuries and the cushioning or hardness of a surface was often proposed.

There is some disagreement in the current literature as to the different factors of sport surfaces that are actually related to injury. One potential reason is that most of the variables studied can be considered indirect indications of the most likely source of the pain or injury, excessive loading. Recently, there is growing evidence indicating that excessive joint moments (torque) may be related to both overuse and traumatic sport injuries. Resultant joint moments are a net result of all the muscle, tendon and ligament forces acting at a joint. They provide an indication of the overall load that is experienced at a joint during a given movement. (see Figure 1).

Differences in surfaces can influence the joint loading. One way is through different friction characteristics. Friction characteristics influence the interaction between the surface and shoe, which in turn influences the loading and moments that occur at the ankle, knee and hip joints. As an example, Figure 2 depicts the different knee moments associated with two similar infill surfaces but differing in friction. Surface 1 had about a 30% higher translational friction coefficient (m = 1.79) than Surface 2 (m = 1.36). Surface 1 resulted in 17 - 23% higher knee joint moments than Surface 2, which are likely due to the increased friction associated with the second surface.

A few epidemiological studies have linked lower extremity injuries to high rotational resistance between shoe and surface. One study showed that injuries were more common under conditions where there was high rotational traction between the surface and shoe. Another study found a higher ACL injury rate with shoes that had higher torsional resistance.

These studies provide important evidence that high rotational friction between shoe and surface is associated with injuries and suggest that lower rotational traction should be the goal. There is some further evidence for associating injuries to the friction between the surface and the shoe. It has been shown for tennis that those surfaces that allowed sliding (clay and synthetic sand, an artificial surface with loose granules) had three to five times less injuries than those surfaces that did not allow sliding (asphalt, synthetic surface, felt carpet and synthetic grill).

There are two important frictional aspects when considering different sport surfaces: translational and rotational friction. In each case it is important to have an appropriate amount of friction. The friction between the surface and the shoe must be high enough to allow appropriate performance such as fast acceleration and quick directional changes, however, if the friction is too high the potential for high torsional and bending moments and injury exists.

Thus, energy transfer to and from the surface can have a large influence on athletic performance. The magnitude of the energy returned from a sport surface to an athlete is a function of the amount of energy input into the surface minus the energy lost and is influenced by some physical constraints as well as different material and structural characteristics of the surface. (see Figure 2) .

Fig 2 Energy input, returned and lost in a sport surface. In each case the shaded region depicts the magnitude of the energy.

The work performed by the athlete on the surface results in deformation energy being input into the surface and is a function of the contact force. Large forces are exerted by athletes during sporting movements. Even simple movements like jogging can produce forces of over two times body weight and peak magnitudes can reach over ten times body weight for more intense activities like running jumps.

As a surface is loaded, it undergoes deformation and energy is input into the surface. However, as it is unloaded, some deformation, and therefore some energy, remains in the surface due to the time-dependent properties of the materials. Thus, in returning to its original shape, the work done by the surface on the athlete is less than the work done by the athlete to deform the surface. This energy that is dissipated in the surface is a material property that is common to all surfaces and can not be avoided. However, the magnitude of the energy dissipation can be influenced.

Energy loss can vary widely between different types of surfaces and even within surfaces constructed for similar purposes. Using drop tests, the majority of the energy input into an infilled surface is lost (about 85%). The sand/rubber mixture in the infilled turf surface absorbs a lot of energy and is not well suited to store and return energy. The energy lost from point elastic surfaces is lower than infilled surfaces (40-75%). There are large differences, however, between point elastic surfaces even when they are constructed for the same installation.

The absolute magnitude of energy loss measured during mechanical drop tests must be interpreted cautiously. Both mechanical and subject tests have been used to try to quantify energy return of sport surfaces. However, the correlation between the two methods is often low. In fact, the energy lost during mechanical drop tests may overestimate the energy lost during actual sport activities because the mechanical tests do not allow the surface to respond quickly enough, whereas the longer stance times provide sufficient time for the surface to almost fully expand to its original thickness.

Energy return is only relevant if the magnitude is large enough to have an influence on performance. Typically, about 15-60% of the energy that is input into sport surfaces is returned. These magnitudes are in many cases substantial enough to influence athletic performance. It has been estimated that the mechanical energy required for a forefoot running stride is 182 joule. 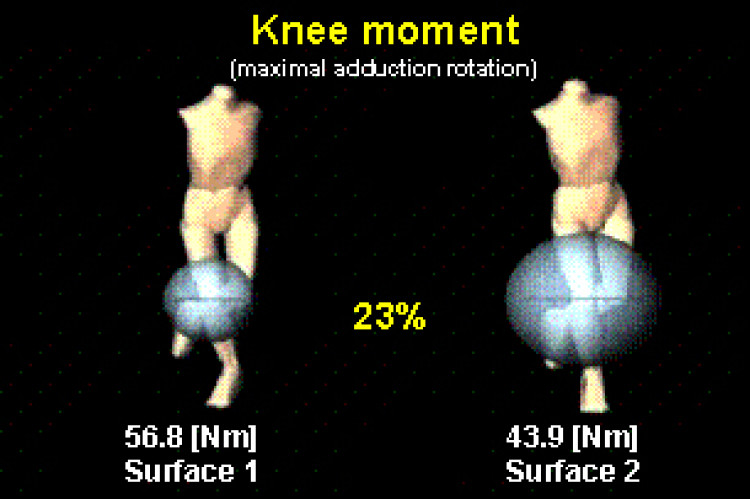 Fig 3 . Measured knee joint moments for a subject performing a 180° rotational movement on two different surfaces. The magnitude of the knee joint loads are schematically represented by the size of the spheres and the percent difference between the two surfaces is also shown.

A storage of 12 joule of energy in a sport surface represents about 6.5% of the energy required. Even if 50% of the energy is lost, a return of 6 joule is still substantial representing over 3% of the mechanical energy per stride. If all of this energy returned aids performance, a 3% increase in performance relates to about 0.3 seconds in an elite level 100m race.

This description is an oversimplification and it is unlikely that all of the returned energy goes directly into athletic performance, however, it demonstrates the importance of energy return from sport surfaces. In fact both empirical and theoretical studies have shown that energy storage and return in sport surfaces can result in real performance improvements.