0 Surface Reconstruction starts at the RDS Arena in Dublin 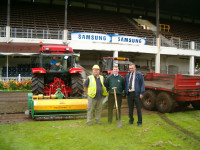 The Royal Dublin Society (RDS) founded in 1731, began work on its arena reconstruction project this week. Dubbed as one of Ireland's largest ever arena and or stadia surface construction schemes, the project has been supported by The Department of Arts, Sport and Tourism. The project involves removal of the existing surface vegetation, installation of an extensive drainage and irrigation system, together with a gravel raft followed by seeding into a carefully specified soil based profile.

"The upgrading forms part of a major strategic development programme on behalf of the RDS. The programme should position the RDS as a major sporting venue in years to come as well as improving our equestrian activities" said Cian O Coleman of the RDS.

STRI, leading international sports turf consultants, were commissioned to carry out the feasibility, design, specification and project management for the scheme. Richard Hayden, a native of Kilkenny is lead consultant for the project.

"I am delighted to be working on such a prestigious project. We initially tested a number of International Equestrian Arenas and rugby pitches to collect and compare performance information. This allowed us to take the best elements of each and develop a unique design and specification. I have been working closely with our agronomists here in Ireland who also have a major role to play here".

Both Ian McClements, who is STRI's Area Manager for Ireland and Scotland, and Conor Nolan, STRI's agronomist in Ireland, will be helping Richard handle the day to day management and aftercare of the programme.

CA Haffey Ltd from Armagh have been awarded the contract work which is expected to carry through into 2007.