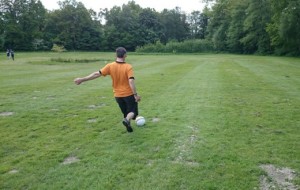 A Surrey club has abandoned golf in favour of FootGolf, in what is thought to be the first time it has happened in the UK.

Former nine-hole parkland course Burstow was struggling under the economic downturn and has chosen to abandon traditional golf in favour of the new hybrid game.

A spokesperson for the new Burstow FootGolf Centre said: "We are under new management and are pleased to announce that long term manager and course designer Paul Wright has returned to Burstow after a six-year absence."

The course has become an 18-hole venue where participants try to kick a football in large holes in as few kicks as possible.

"Ninety-nine per cent of people enjoy kicking a football and to be able to go on to a golf course and be able to do something relatively successfully straight away gives them that instant satisfaction."

Despite Burstow acknowledging that they hope to market the course to stag do's, the sport is in the final stages of being recognised by Sport England and is proving popular with a wider demgraphic.

"Those sort of numbers are just not seen on golf courses at the moment."