A diary By John Vaughn-Davies 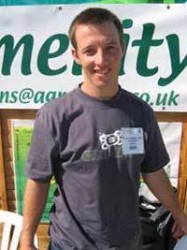 During the season after each game, flood the wicket, overseed with the vari-seeder, brush in both ways, repair batsman and bowlers damage to the wicket, level off any indentations, overseed, go over with mower without the blades engaged to roll the seed in, place germination sheet over the wicket.

Sounds jumbled, but by doing the above you can stay on top of the renovations during the season so that it's not required at the end of the season (Autumn) when the weather is not as good. After being hampered by the weather for our first few meetings, we finally got the scheme going in time for the Autumn renovations.

Arriving at Guildford Cricket Club I noticed that cricket square had been roped off and there were hockey goals on the outfield, with the cricket season a distant memory I was not expecting much work to be available. Bill Clutterbuck, our mentor, had other plans.

The square was in good shape as the top dressing and bowling ends had germinated since our last meeting. Bill had just dragged a brush over the square to get rid of the dew, this is done to prevent diseases and fungus which thrives in damp conditions. The water drops on the individual blades of grass heated up by the suns rays makes it a haven for fungus. I notice a few fairy rings on the square but nothing to panic about, Bill advised that if fairy rings appear try and get rid of them ASAP to get on top of them, as they do get out of control. "Think of the square just like us, they need a nose to breathe and a mouth to eat. We spike for the square to breathe, fertilise and water for the square to eat."

We spiked the square to aerate the loam, identifying which conditions are ideal and what happens when you spike when it is to wet. One wicket was wetter than the other for this exercise, the wetter of the two wickets brought up bits of loam which becomes a bit like a worm cast, not ideal as the casts create a mud weed bed. Repeat during the off season when it has been wet as it helps with drainage. The square could breathe now.

Time to feed the square. The fertiliser Bill had was Nitrogen, Phosphorous, Potash 5.5.10 + Fe (iron), the iron helps to control any moss there is in Autumn, so its better to have higher iron in Autumn and less in Summer. After the season the grass roots need to be fed as the root system is what binds the loam together and helps it recover during the season. The iron also helps to get the surface harder. I found the science interesting and there is a lot for me to learn on that side of things.

Overall, I am really enjoying the experience and cannot wait to put it to practice.