by Chichester Observer
in Cricket
on 20 Jun 2016

0 Sussex frustrated as another T20 game is lost 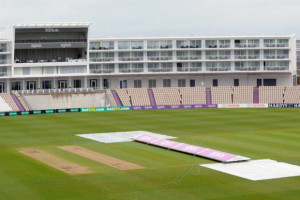 A downpour of rain and hail around an hour before the scheduled 7pm start seemed to catch out the groundstaff and after it was over, the umpires felt they had no choice but to call it off - with fans still coming into the ground.

Sussex captain Wright said: "It was a huge shower but to have a game called off because water has got onto the wicket is very annoying and not what you expect from a Test ground.

"There's not a lot you can do, you just have to suck it up, but it feels a bit unjust. The groundsman said straight away it caught him short. Because it was hail and it was coming down so hard the covers he wanted to get on were too heavy and he held his hands up and admitted he got it wrong.

"The wicket was so wet you wouldn't play village cricket on it - it was like mud. Even if he got the wicket dry the rest of the square was soaked."

Hampshire director of cricket Giles White said: "The rain caught everyone by surprise, the ground staff didn't see it either. I have never seen a shower like it here and it has written the game off.

"The ground staff are excellent here, there was nothing on the radar. We just caught the edge of it but it was astonishingly heavy.

"No one can criticise them, they did their best but unfortunately water got on the wicket. The water seemed to bounce underneath the covers and over-flowed the gutters, it was extreme.

"This is the biggest game of the year for us, a T20 against our local rivals, it is unfortunate circumstances - it is not a time for finger pointing."

Sussex remain well placed in the table with eight points from six games and if they can maintain the same sort of form, they should reach the quarter-finals.

For the original article, visit www.chichester.co.uk.