Knaresborough Golf Club in North Yorkshire has seen many changes since it was founded in 1920, but due to the dedication and tenacity of Head Greenkeeper Andrew Cawood and his team the course has been brought fairly and squarely into the sustainable future and received one of the highest possible accolades. "These greens are the best I've played on all year," commented one of the three winners at a recent Pro Am., while a number of other low scorers tweeted to each other saying how smooth and fast the greens were.

Praise indeed, but only as a result of four to five years work gradually changing the soil structure, balancing the nutrients, increasing sward density and the percentage of fescue and bent grasses. "I've been here 31 years," says Andrew. "I had a full head of hair when I started."

The club's history means that Andrew and his staff of five have a mixture of 15 traditional greens built from mixed and original soil and 3 new greens built to USGA spec. "The club started off with 9 holes that we believe were leased," Andrew explains. "We bought this land in 1973 and moved progressively to the new Butterhills site during a period of 7 years. In 1980 the 18 hole par 70 course opened for play, which was then changed to the current par 72 layout five years ago. This was when we built two new holes including the last of our USGA spec. greens." 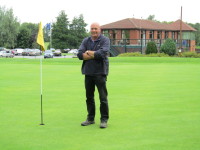 Not long after this most recent renovation Andrew made a conscious decision to amend his maintenance practise. "I wanted to go down the sustainable route," he remembers, "and cut down on fungicides and fertilisers."

Having known David Snowden of Agronomic Services for some time, Andrew contacted him and the two embarked on a four year journey to improve rooting and sward density, reduce thatch build up and improve the soil structure making it more efficient. Andrew also wanted his members to spend less time on winter greens due to standing water.

"We started with soil analysis," David recalls "and found that there was very little of the most important nutrients, Calcium, Magnesium, Potassium and phosphorous. Phosphorous in particular was very low. Once we'd identified the short falls in the soil Andrew was able to begin a nutritional programme of granular and foliar feed to balance these levels. The 14th green in particular had poor sward density (as did a number of the greens in spring) so the programme included Per4Max, a biostimulant specifically designed to produce density, vigour and plant strength. Per4Max can be applied with Primo Max to really thicken up the sward."

"We added Dolomitic Limestone during the winter months to increase the soil calcium and magnesium levels, then in spring and summer used the soil conditioner CalpHlex, which converts the two elements into a soluble form helping to produce a strong root system," David continues.

The analysis showed that on the other greens the soil contained too much Iron and too much Phosphorous. "These two elements bind other nutrients together reducing their availability for root up-take," David explains "and the only way to feed the sward is through the leaves - ie. foliar feed."

Analysis of the irrigation water revealed a high percentage of chlorides and biocarbonates (HCO3), that chemically bind Calcium and Magnesium together which has the effect of sealing the surface. Greenstaff embarked on the straight forward process of flushing these unwanted elements through the rootzone by applying two to three applications of Pervade, CalpHlex and Oxy-Rush. The soil penetrant Pervade, applied in autumn, winter and spring also helped reduce 'sponginess' caused by waterlogged thatch.

Knaresborough is a parkland course built basically on clay and Andrew has always followed an intensive aeration programme including hollow tining (in April and August), pencil tining, star tining and slit and solid tining. "Occasionally we'll verti-drain but it takes time and because we've got a lot of stones in our greens they tend to get stuck between the tines," he says.

"We needed to get as much air into the soil profile as possible, as it encourages aerating bacteria which break down organic matter and reduce thatch," David explains. "Without air, or oxygen to be precise, anaerobic bacteria can flourish, gas exchange cannot take place and anaerobic conditions prevail which can lead to black layer."

This vital aeration process, and a consequent reduction in thatch has been accelerated in the last two years by the introduction of Oxy-Rush, a form of liquid oxygen which delivers sources of biologically available oxidants to the soil enabling the aerobic microbes to be prolific, controlling thatch and improving rooting. Andrew and Neil his deputy have been able to spray the product along with wetting agents and other soil applied products during the growing season.

As the soil structure continues to improve, thatch levels reduce and the grass plants receive the right, balanced nutrition, nematodes which were once a problem are less effective. "Healthy strong roots are far less susceptible to attacks from nematodes, which means that they are less of a problem," David explains. "Because we have stronger plants and rooting the sward is not affected."

Andrew finds that after years of over seeding with a traditional mixture of Fescues and Bents following hollow tining, he is now getting a good sward containing far less poa. "Top dressing is getting easier and easier," he reports.

He also finds that he is using far less fertiliser and his fungicide use has decreased by 70%. "We used to have quite a disease problem but we don't have half as much now. We seem to have come out of last winter better than most. I don't know if it's the feeding or aeration programmes or a combination of both."

Whatever the reason, probably as he says a combination of both programmes plus a dedication to the improvement to his course, Knaresborough Golf Club's secretary, himself a PGA player is delighted at Andrew's success. "We hosted the Castle Trophy on the 5th June, a 36 hole scratch event five days before the Pro Am and were told by players that the greens were in a fantastic condition," he says. "Whatever praise Andrew gets is well deserved."