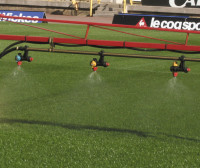 EU inspired reductions in pesticide use, sustainable golf, concerns about fertiliser run off and the need for top quality playing surfaces made up of fine grasses are giving rise to a major rethink on how sports turf should be managed.

There is no quick way to change and maintain excellent playing surfaces because USGA specification golf greens or predominantly sand based football pitches are not designed for sustainable growth. When these rootzones were developed heavy fertiliser, water and toxic pesticide applications were the norm and the key element was drainage and the ability to maintain play in all weathers.

Poa annua was an accepted grass and many Greenkeepers and Groundsmen honed their skills in managing poa annua while juggling water fertiliser and chemical inputs.

On soil based rootzones people still talk of "traditional greenkeeping" as the application of ammonium sulphate and ferrous sulphate, though passing ammonia through concentrated sulphuric acid at 800oC to make ammonium sulphate is hardly traditional, and did not start until the end of the First World War.

It is now mostly made as a co-product of coke and plastics production. Ferrous sulphate is a by-product of the steel pickling industry. Both have a relatively high salt index which, among other things, adversely effects soil microbiology and natural nutrient uptake and disease defence mechanisms of grass.
So, how can grass be managed to meet the demands of legislation and the environment to produce the exceptional playing surfaces demanded by today's sportsmen?

To move away from chemical dependency we need to understand the basics of soil biology. Grasses are an extremely important part of the global food chain, they convert atmospheric carbon and nitrogen into protein and carbohydrates for a massive percentage of the world's mammals. There are many thousands of mechanisms to ensure grass growth continues in times of stress, to stop the chain breaking down and to prevent mass starvation through the entire food chain. 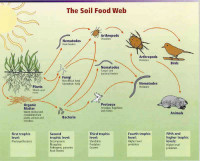 Since the 1920s, when inorganic fertilisers were introduced to override natural nutrient uptake, sports turf soil has been prone to excessive fungal disease, dry patch, thatch build up and black layer. Turf managers have been taught to use fertilisers and chemicals to treat the symptoms of poor quality soil. Excessive fertilisers, fungicides, water and iron very successfully break down the soil food chain, blocking natural growth and disease suppression. More chemicals are introduced to treat more symptoms and the soil becomes less and less fertile. We probably all know of turf managers following this chemical dependent management and losing their jobs when the rootzone becomes too toxic to support decent grass growth.

Let's look at how grass naturally survives. Plants photosynthesise by taking energy from the sun, carbon and nitrogen from the air, producing carbohydrates, proteins and sugars. In grass about 50% of this energy goes into top growth, to feed the above ground food chain and 50% goes back into the soil via the roots and thatch to feed the underground mostly invisible food chain. It is the underground invisible food web that must be cultivated to manage disease and grow the fine grasses needed for a good playing surface.

Out of sight used to be out of mind but, using molecular analysis and electron microscopes that allow identification of individual bacteria, fungi and other organisms, we can now start to understand how natural processes work in sports turf rootzones and how to use them to our advantage.
Food underground comes from exudates from plant roots, in the form of protein (like in eggs,) sugars and carbohydrates (as in flour), the ingredients to make pancakes or biscuits, this is the main food for bacteria.

When grass dies it becomes thatch full of cellulose and lignin, this is the favourite food of fungi which converts dead grass, leaves and twigs to humus - the nutrient store and foundation for future plant growth. Bacteria and fungi form the foundation of the whole food chain. The good (saprophytic) microbes only live on dead matter. There are about 20,000 enumerated soil bacteria and 15,000 fungi Ingham et al, of these most turf managers know the few disease causing (pathogenic) fungi which live on live plants by name. 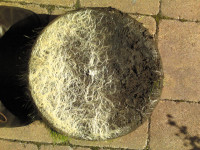 There are also fungi which live on carbon and sugars inside the grass root. To stop the plant from dying through lack of carbon these fungi called mycorrhizal fungi use their hyphae to suck up phosphate, nitrate, trace elements and water and feed them to the plant, giving the plant a vastly extended root system. Mycorrhizal grass can grow many times faster than grass in sterile soils. (see Fig 2 left)

It must be said that there is much to discover about how all these bacteria and fungi interact but we do know how they fit into the food chain.
In a gramme of healthy soil you may find about a billion bacteria weighing about 100µg and a similar weight of fungal biomass, only half may be active but for rye, fescue or agrostis grass growth it is important to have approximately equal bacterial and fungal biomass, whereas poa annua grows in poor bacterial dominant soil.

How nitrogen gets into the grass

Some bacteria fix nitrogen from the atmosphere, others take it from root exudates in the soil. Locked up in a bacterial cell or fungal hyphae nitrogen is not available to the plant. The microbes have to be eaten by the next stage of the food chain comprising protozoa and nematodes. There may be 10,000 protozoa in a gramme of soil but only a few hundred nematodes. Some nematodes can be seen with a magnifying glass.

Protozoa and nematodes eat the bacteria and fungi, they use the carbon to grow and excrete excess nitrogen as ammonium, which feeds the grass when converted to nitrate by nitrifying bacteria in the presence of oxygen.

There are four types of nematode, bacterial, fungal and root eating, and predators which eat other nematodes. Fungal hyphae and nematodes naturally aerate the soil, they create small spaces in the soil leaving little tunnels full of excrement (ammonium) for roots to grow into and feed on and so the chain expands up to moles and other burrowing animals.

Working together all these microbes and organisms ensure a constant supply of nutrient for the plant, avoiding the boom and bust of the fertiliser cycle, they protect the grass from disease, because if the grass dies the whole food chain dies, and recycle dead grass back into usable nutrient
For sports turf purposes we try to stop the food chain at non-casting worms but, up to that point, all aspects of the chain are necessary for natural healthy grass growth.

Why are sports turf rootzones sterile?

Plants have evolved growth mechanisms in association with soil bacteria and fungi over millions of years. Ammonium sulphate has a salt index of 0.7. Dumping a tonne or more of ammonium sulphate (salts) per hectare per year means that the plant is swimming in a sea of food and mineral salts. The plant takes up nutrient by osmosis and does not need its associations with microbes to live, which coupled with the fact that bacteria like sugar, not salt, excess water and compaction which deprives the microbes of oxygen, the removal of animals which replenish the microbes via excrement and near daily cutting mean that the food chain cannot possibly survive.

We often find that sports turf root zones have less that 1% of the microbial biomass, and that the total fungal biomass is much less than total bacterial biomass though, as we shall see, fungi are extremely important to your greens management programme.

You can now see the reason for adding bacteria and fungi and special food sources is to re-establish the bottom rungs of the soil food chain.

How does this help the turf manager?

If the grass dies we all starve, so nature has worked out some clever tricks to keep the plant and food chain alive. Figure 3 is a root covered in mycorrhizal and other fungi which shows blue in the picture, you can hardly see the root for fungi. It effectively forms a barrier against any disease-causing organism that wants to penetrate the root.

The good fungi and bacteria also get to any freely available nutrient first and out compete the pathogens, this is called

competitive exclusion. A third way that beneficial microbes keep their host plant alive is to produce antibiotics against disease-causing organisms. Finally, in times of stress and food shortage some microbes eat other microbes, the bad guys are usually the first to go in this final solution.

There are, of course, specific remedies for each disease as they metabolise in different ways but, in general, diseases occur on sports turf because fungal pathogens, which exist partly to cull weak plants, have a lot of weak grass to attack and very few of the natural defence mechanisms to stop them. (Kate Entwhistle's article in the August September 2007 edition has an excellent explanation of how pathogens attack).

Strengthening the sward and replacing the defence mechanism has to be an essential part of integrated pest management.

A hectare of greens with 2cm of thatch has about 200m3 of dead organic matter that is full of excellent nutrients diluted with top dressing. Current wisdom is to hollow core or rip it out and replace it with top dressing plus seaweed and/or humates i.e. dead organic matter full of excellent nutrients. An expensive solution which short term spoils the playing surface but, more importantly in the long term removes a key source of food for fungi and humus and organic acid production.

The simple answer is to add fungi and oxygen to convert thatch into humus as it is formed releasing the locked up nutrient providing a building block for future plant growth that holds moisture and increases cation exchange capacity.

Other advantages of microbially activating and degrading thatch are that thatch is a great source of nutrient for fusarium, thatch fungus, basidiomycetes (The fungi that produce the hydrophobins that cause fairy rings and dry patch) and other nutrient loving fungal diseases. If the thatch is already full of beneficial fungi the pathogens cannot get a seat at the table, so they cannot grow.

Percolation rates increase giving faster play after rain and, as we shall see, degrading thatch helps reduce pH and promote the growth of bent and fescues.

If you analyse soil supporting poa annua you find a bacterial biomass about ten times greater than fungal biomass, but soil that supports old established fescue and bent grasses has a nearly equal amount of fungal and bacterial biomass. Most turf managers report a sudden sustained increase in agrostis tennuis grasses when they start to degrade thatch in situ, i.e. when the fungal population increases.

Poa annua does not associate positively with mycorrhizal fungi, which gives all other grasses a growth advantage but, additionally, the combination of increased thatch reduction and reduced fungicide application during the growing season combine to substantially increase the colonisation of bent, rye and even fescues. The common theme is that fungal biomass has to increase and pH in the thatch layer reduce as humous and humic acids are formed.

Unfortunately, fine sports turf managers have to preserve the surface and drainage characteristics of their rootzones, so do not have the organic options open to farmers or landscapers.

My company, Symbio, has been working with sports turf soils for over eighteen years and, with our research partners, have developed easy to apply solutions to build a healthy soil food web in all common turf rootzone materials. We will be explaining how to convert your poa annua to fine grass, manage disease, reduce thatch, reduce dry patch and fertiliser inputs in future editions of Pitchcare.