Cutting greens at 2mm, aggressive frequent verti-cutting and 200 tonne of sand dressings per year. Surely, some greenkeepers could jeopordise their jobs, and their greens, with programmes such as this. But Greg Evans has employed this regime for the past six years and guess what? It works.

Greg's greenkeeping philosophy comes from a player's perspective. While still in his teens and twenties, he reached a standard that allowed him to play some of the finest golf courses in Europe and North America. He was fortunate enough to examine, at first hand, the effort and skill that enabled the greenkeepers to get these golf courses to such high standards. But, he also took the opportunity to talk to greenkeepers at most of the courses, both before and after each tournament. His interest in greenkeeping developed, hand in glove, with his playing career.

In 2003, Greg took the Course Manager's position at Northwick Park Golf Centre, a new development in West London. The challenge was to build and grow-in a course that had previously been a rubbish tip. The theme for this golf centre was based upon feature holes from famous courses around the world. Northwick Park replicated holes ranging from Royal Birkdale with long wispy rough to Augusta with manicured fairways.

To showcase the holes, top class playing conditions were required. It was at this stage that Greg first teamed up with the Irish agronomist, John O'Sullivan. He describes O'Sullivan as forward thinking in his approach to course management and, as a young course manager, he was open to new ideas. With his golfing background he knew the type of course that he wanted to produce. He was, therefore, willing to experiment with some of this Irish agronomist's suggestions.

Greg has always appreciated playing golf courses with tightly mown fairways playing to firm, fast, true greens. He feels it brings out the skill in the game. But, over the years, he has also played many courses that cater for the middle range handicapper, with fairways that are cut long and greens that are hairy and slow. He believes that surfaces that are firm, quick and true are more difficult to hit to, and create a real challenge when putting. These types of courses seem to be concentrated on heathland soils or links, which are predominantly on sand, and he wanted to know whether these conditions could be reproduced in different environments, such as parkland courses with heavy clay content, yet remain sustainable? Conventional wisdom assumed that sustainability would remain a problem.

At Northwick Park, Greg built brand new US specification creeping bent golf greens. They were sown with G6 and then oversown with A4 and G2. From the start these greens were amazing. Germination took place within nine days and, within three weeks, they were being cut at 9mm. By the sixth week the height was reduced to 5mm and Greg believes that the greens could have been playable within three months. The approach taken at Northwick Park was aggressive from the outset with low cutting heights, frequent verticutting and heavy sand dressings. With a balanced fertilitiser and water programme the course achieved excellent results. The two designers, Peter McEvoy and Ricky Willison, have played on some of the best golf courses in the world, and both have reported that Northwick Park was equal to anything that they had putted on before. But, above all, this regime has proven its sustainability in that location.

Greg feels that there are a few myths that he hears about creeping bent from time to time in Britain. The first is that you don't have to throw on the water and fertiliser to keep them alive. Yes, they do like a nice balanced feed, and probably more than fescue, but Northwick Park used to keep them quite lean, and they responded well. The second is that they become poa (annual meadow grass) infested within a few years. This has not been the case at Northwick Park, or any of the other courses that he has been involved in, and has found the opposite to be true. Because the sward is so dense, it keeps the Poa out.

The last is on cutting heights for creeping bent. This grass has been bred to be cut low. Anything above 3mm and the grass doesn't like it and can become very thatchy.

Greg is now Course Manager at Ealing Golf Club and is a participant in Complete Golf Solutions, a consultancy business which he manages. When he took on the Ealing Course, the greens were completely different.

The course is 110 years old, clay based, undrained, grass species containing 90% to 100% poa, disease ridden with some of the most aggressive fusarium he had ever seen. The greens had three to four inches of thatch and, on some, only 50% grass cover! The previous winter some greens had been closed on numerous occasions due to waterlogging. This old course represented a new challenge, requiring different solutions. 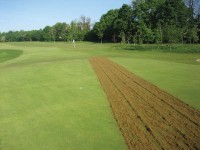 From the start, Greg implemented a very aggressive maintenance regime. The backbone of his regime would be low cutting heights, frequent verticutting, heavy straight sand dressings and lots of aeration. The greens were immediately taken down from 5mm to 3mm and were put on a fortnightly verticut and sand programme. Fertilitiser was cut right down and watering was only done by hand. The bare greens were spiked, seeded and sanded. Sections were roped off and allowed to germinate. Within two months the results were outstanding and the greens had sprung to life. All of a sudden they started to get a bit of pace and the 'snakey' ball roll improved dramatically. The seed heads started to disappear. This was partly down to the reduction in height, but also a programme of Shortcut (Primo's predecessor) was implemented. They started to firm up and the colour went from a dark green to a light pale colour.

By the end of the summer, the cutting height was down to 2mm. The bare greens had 100% grass coverage and, most important of all, the Ealing course started to get golfers' praise again. The aggressive approach was continued in the autumn. The greens were hollow cored, overseeded with pure colonial bent, deep vertidrained and 100 tonnes of pure sand was applied. The following spring Greg introduced the Graden machine on the greens. 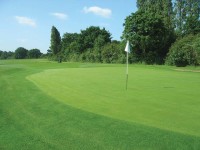 This programme for the greens has continued for the past three seasons with great results. The summer cutting height has been set at 2mm, with winter going up to 3.5mm. 200 tonnes of pure sand has been applied each year. Spring and autumn overseeding has taken place and they are spiked monthly, ranging from 8mm tines in the summer to 25mm in the winter. Today, they are firm, fast and true, exactly what the R&A and STRI advocates.
Last June, the golf club held the Middlesex County Championships. The Friday previous to the tournament the height of cut had been reduced to 1.8mm, double cut and rolled. The following morning the greens were again double cut at 1.8mm and rolled. The stimpmeter reading was at 13.5.
But is this approach sustainable? Greg feels so. He points out that Ealing's membership is on the up and golf society events have increased by 26% in the past year.

Fungicide usage is down from ten applications in 2005 to four last year. He has incorporated organic fertilisers and natural seaweeds in to his programme. But, most important of all, Ealing greens have not been closed for the past two seasons due to waterlogging, with the added revenue greatly appreciated by the club.

Greg believes that conventional greenkeeper education being taught is not balanced. When he was at college, he was taught three basic rules. Firstly, your summer cutting heights should be at 4mm for everyday play. If you feel the need to go below that, make sure it's for a very short time and straight back up, or you could end up losing your greens. Secondly, never apply a straight sand dressing. It should always have some soil in there - typical example 70% sand/30% soil. The reason for this? You could encounter root break. Lastly, always overseed with a fescue/bent mix. Poa must be eradicated at all costs. The rationale, Poa is a weed and you will get disease ridden, bumpy greens.

Recently, Greg sent a young apprentice to college and was informed that those principles are still being taught today. He concedes that his approach may not be for everyone. A links course with undulating greens will have to be careful with the speed of their greens. But, he has proved that, over the years, on several different environments, that his approach not only works but is also sustainable. He feels that there is a place for aggressive greenkeeping and that appropriately selected grasses can sustain growth under a wider variety of conditions than previously taught.