"I admit that I had to tweak some of my original ideas to accommodate other pressures but, on the whole, the members are pleased to see the improvements out on the course"

It was over three years ago that I last called in to see Stuart Yarwood, Head Greenkeeper at Lymm Golf Club in Cheshire, and a lot has happened to this 'gingerbread' in that time. Not only has he gained his Master Greenkeeper award from BIGGA, but he has become a father.

Last time I called in, it was a dull old day. Today, the weather was fantastic, the sun was shining, and it was a perfect day to inspect the course and see some of the improvements Stuart and his staff have made since the last visit.

Stuart came to the club in 2000 as Head Greenkeeper. The 18 hole parkland course is built on a mix of old Mersey river bed and the sand, gravel spoil from the Manchester Ship Canal, so it does tend to be fairly free draining. "When I came to the club," explained Stuart, "it was typical of courses managed in the area at that

"They certainly didn't want any aeration, and were quite happy resting the greens over winter. They were annual meadow grass, good for 4-5 months of the year and requiring a lot of babysitting and expensive inputs to keep them to an acceptable playing standard. I thought things could do with a change for the better."

Stuart, though, was realistic in his approach. "I knew I could never get to the fescue surfaces of the classic links, but thought a bit more bent would come in handy. I was convinced that relying on some tried and trusted greenkeeping skills would help improve the condition of the greens."

"The greens were close to one hundred years old, and the club's management had been contemplating a full rebuild of all of them. I soon talked them out of that idea, by explaining that a programme of traditional greenkeeping s

kills would improve their condition over time, with the ultimate aim to make them playable all year round."
"I had to point out that this would be no short term fix, and that it was going to take a number of years to achieve. More importantly, members had to be patient and trust my skills, knowledge and commitment."

Stuart's first step was to write a Course Policy Document. "I had the backing of the club, but I needed an insurance policy." A five year plan was put into operation, with Stuart implementing a robust sustainable approach to greens management.

"We set about a programme of micro hollow coring every month, using the deep Graden, and vertidraining twice a year: importantly, when dry and in the playing season, not in the wet Novembers when the competitions had finished - and slitting more times than you could shake a tine at!"

"Over a period of three years, we reduced fertiliser applications from 200kgN to 85kgN, and further still over the remaining years."

Water was only applied by hand. To this day, Stuart has never used his pop up irrigation system. "If I did, it would only be in extreme circumstances," he states. "We increased our topdressing, and wetting agents were also used, which helped to reduce outbreaks of fusarium dramatically."

"We also set about thinning out the trees on the eastern sides of greens, allowing more light and air to dry out the surfaces. After three years, we noticed the bent grasses coming back in, so we introduced a programme of overseeding to speed up the process of improving the sward composition."

It has been a great learning curve for both Stuart and the members. "Coping with the new management regimes undertaken over the last few years has, at times, tested their patience," Stuart confirms. "I admit that I had to tweak some of my original ideas to accommodate other pressures but, on the whole, the members are pleased to see the improvements out on the course, especially the playing surfaces - greens tees and fairways."

"We now apply less than 60kgN per year to the greens, less than 200m3 of water, and have not sprayed for fusarium for over four years."

"Bent grass populations are around 60-70% and they even have a whisper of fescue on most of the greens. Money saved on previous inputs has been ploughed into to improving other areas of the course."

Stuart admits, though, that he went through some difficult times. "Some of the work we undertook was not always popular with the members but, after much patience from both sides, the course has changed to a facility that can promote golf all year round, and that has to be to the benefit of all," says Stuart.

Like most golf clubs, with less money about in the austere times, the staff tend to do most of the winter works themselves. "We have been very busy building new tees, realigning bunkers and planting some new gorse plantations, along with the ongoing tree thinning work. We've also been busy refurbishing the driving range, and creating a nice new access area to it." 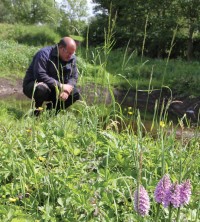 "One of the most rewarding projects, recently completed, has been the building of some inland water features to entice more wildlife to the course. I'm particularly hoping to attract water voles and encourage more wetland fauna. We've had wild orchids flower this year and the members appreciate how these new features have made better use of, what was poor quality and unsightly areas."

Stuart has, along with some of his fellow Gingerbread Men, been actively involved in the STRI Programme, an initiative that is trying encourage more greenkeepers to record the performance of their greens by regular monitoring (weekly or fortnightly) speed, firmness, smoothness, moisture content and soil analysis.

The information is sent back to the STRI for them to evaluate the results and recommend appropriate management regimes.

As Stuart says, keeping records is a good practice and should be encouraged. "The more you understand about your greens the better," states Stuart. "Also, being able to compare and share information with other parties and fellow greenkeepers is beneficial. As I have always said, a problem shared is a problem halved."

Just for the record, the following cutting heights are implemented at Lymm; greens - summer 4mm, winter 5mm; tees 9mm and 12mm; approaches 9mm and 12mm; fairways 14mm all year round with the semi rough kept at 31mm and the cut rough at 50mm.

Ecology rough is cut, scarified and collected in spring and late summer. All clippings are composted.

All course arisings (leaves, grass and clippings) are collected off course in palletised bins. Other waste - wood chips, bunkers sand and other materials are set aside for composting, recycling around 100-150 tonnes every six months. The end product is used to make soils for landscaping and building new tees etc.

The greens are solid tined monthly, vertidrained with 13mm tines in late August, star slit and brushed weekly, and verticut at 1mm depth three to four times a year.

Stuart's feeding programme is centred around an application of lawn sand (3:0:0 +3%Fe) in late February or early March; 8:0:0 in May and 8:0:0 in July (8:0:0 contains sulphate ammonia, dried blood, hoof and horn, but no Fe) - trying to keep all organic where possible. Symbio 50 cold pressed seaweed is applied monthly

during the summer months, Maxicrop no. 7 seaweed monthly during the winter, along with Revolution wetting agent monthly between February and September. A Go Green chelated iron product is applied during the winter months when required.

In total, between 40-60 units kgN/Ha are applied to the whole course. Stuart has not seen any evidence of fusarium or dollar spot in the last two years, and he has only applied one dose of fungicide to the course in the last six years.

He overseeds his greens with bent grass seed mixtures - Manor or Aberroyle - at 6gm/m2 in mid September to repopulate the sward. Between 100-150 tonnes of medium course USGA sand, with a 1.8% organic amendment (fen soil) are topdressed onto the greens throughout the year, on a little and often approach.

A combination of regular cutting, topdressing and turf rolling helps to maintain a consistent putting surface throughout the year. Greens are mown one day and rolled the next.

Summer speed is maintained at between 8.5-10ft, winter speed 6-8ft, 6-8 on STRI smoothness scale through the year, (6-7 winter, 7-8 summer).
All the machinery is serviced in-house and the course looked after by five staff who, between them, have over one hundred years experience of working at the club; a great asset which can now be seen by the condition of the course.

Since my last visit, there has been a massive improvement in all aspects of the course. I just hope the club members recognise the work Stuart and his staff have achieved on a fairly modest annual budget. It must be pleasing to be seeing the fruits of their labour whilst convincing the club's members that, after all the disruptions, they finally have a course they can be proud of.