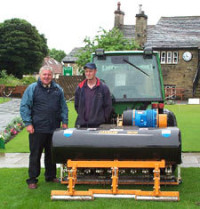 West Bradford Golf Club was founded in 1900 by a group of wool merchants and the clubhouse is a listed building dating back to 1720. It is a mature, 18-hole course with tree-lined fairways and prevailing westerly breezes ensuring a "challenging" round of golf, in beautiful surroundings.

When Michael Whitehead was appointed Head Greenkeeper, he inherited a few problems. He says, "Several of the greens were like "puddings" - so wet that you left footprints when you walked across them. Most of the greens were so compacted that they had developed Black Layer and you could actually smell the methane in some areas. We also had severe thatch infestations."

In consultation with the Greens Committee, under the leadership of Chairman Steve Warner, a new maintenance programme was drawn up focussing on increased aeration plus deep scarification.

Michael had been to an Open Day at The Sports Turf Research Institute where he saw one of the first demonstrations of the SISIS AER-AID SYSTEM, and realised that this could be the answer. Steve Warner visited the BTME Exhibition to see the AER-AID for himself and a demonstration at West Bradford was arranged.

It was January and three greens were aerated, all with standing water. The 3rd had been out of play for 9 weeks and was the first to be treated. By the time all three greens had been completed and the AER-AID brought back to the sheds, the 3rd was dry and playable. Quite staggering.

Needless to say, the club purchased an AER-AID and it has been used every three weeks since its arrival.

"Every time we use it, we see improvement.", says Michael. "Even after the recent very dry spell, followed by heavy downpours, there is no longer a problem with standing water. The greens now drain very quickly and when we move the holes, there is no sign of Black Layer."

A contributory factor in choosing the AER-AID was that hollow tines can be fitted for Autumn top-dressing, although Michael thinks that this expensive operation may not be needed quite so often now.

Steve Warner is very much a "hands-on" Greens Chairman and is keen to ensure that members get the best possible value for their money, and of course to achieve the desired results with as little disruption to play as possible. This is one of the AER-AID's strongest points - effective aeration with very little disturbance of the playing surface. In fact, Michael confidently aerated his greens with the AER-AID the week before Captain's Day and disruption was so minimal that none of the members noticed!

West Bradford Golf Club also purchased a SISIS ROTORAKE 600. They had used an AUTO-ROTORAKE for some time and had found it effective and reliable, but needed the extra depth offered by the bigger scarifier. Working at 2ins, Michael says that he removed a huge amount of thatch during the Spring treatments and significant improvement to the greens is already evident. Again disturbance of the playing surface is negligible, so the members are happy too.

This seems to be the secret of good greenkeeping at a private members club - effective turf maintenance practices, minimal disruption to play and good value for money.