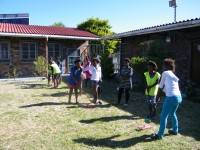 February saw SGD venturing south to work with one of South Africa's leading charities on the provision of a golf and learning facility close to the centre of Cape Town.

Amy Biehl was an American anti-apartheid campaigner who was killed during a mob riot in the township of Khayelitsha. This community, together with Nyanga and Mitchell's Plain alongside it, has a population of close to three million and, after her death, Amy's parents campaigned for universal access to better education and to greater social and employment opportunities in the townships of the Cape.

The Amy Biehl Foundation presently runs outreach programmes for over two thousand young people including a comprehensive sports programme that, as yet, does not include golf.

Through the FirstGolf initiative, SGD, together with the Mayor of Cape Town, local MP Leonard Ramatlakane, the Provincial Government of the Western Cape, the Western Cape Golf Union and representatives of the communities, the project will see a driving range, golf academy, a children's course and a nine-hole public course developed for those who currently have no chance to play the game.

As an extension to the project the facility will be linked to the adjacent False Bay College, which will develop a curriculum of vocational training within the golf industry with the direction and help of the Greenkeeper Training Committee and FirstGolf partners Ransomes Jacobsen, Rainbird and SnagGolf.