The project started in August last year and was halted by the autumn and winter weather - but the pitches were finally completed and seeded last month.

"The pitches now look fantastic," says Phil Owen, who has been chairman of the club for more than three years, having been with the club for 10 years.

"We had previously been losing 50 per cent of play because of drainage problems on the lower pitch. But the cut-and-fill for the new pitches together with new drainage will have dramatic results on club usage."

More than 350 club members of all ages, from under-sevens upwards, use the pitches for both main matches and training.

Swansea Uplands RFC have been promoted to SWALEC Division Four West from Division Five. In 2019 the club will celebrate its centenary.

The new pitches are part of a £1.2million development which includes floodlighting and a new clubhouse, which is currently under construction and should be completed by October.

The developments have been funded using the legacy of a late member together with money from the Welsh Rugby Union, Sport Wales and the Millennium Stadium Charitable Trust.

As well as members of all ages, Uplands RFC is also home to Swansea Gladiators, a team of disabled rugby players.

"This is a club for the community and very much a facility for everyone," says Phil Owen.

"The new pitches are fantastic and we are delighted with the results. Speedcut did an excellent job with faultless workmanship." 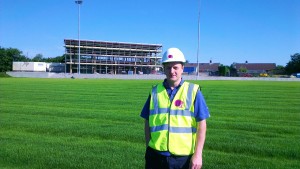 nges, being some of the most difficult soil conditions we have encountered. We removed more than 1,000 tonnes of stone from the site and it was a tough job for our specialist stonepicking machinery.

"We have a very good relationship with Phil and the club and they have been very helpful throughout the process. Despite being delayed by the winter weather the pitches have been successfully completed.

"The grass is looking excellent and we now look forward to it becoming well-established before we carry out verti-draining and sand topdressing operations."