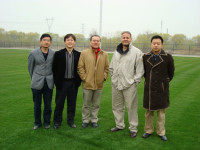 The Birds Nest Olympic Stadium will be the focus for sporting performance over the coming two weeks - with intense attention not only on the athletes, but the turf playing surface on which they will perform. Syngenta fungicide programmes will ensure it is delivered and remains in pristine condition.

As soon as the fireworks die down from today's Olympic Opening Ceremony, a well-rehearsed team will swing into action to lay the turf that, over the coming weeks will be the focus of the world's attention for sporting excellence. The quality of the turf within the awe inspiring 'Birds Nest' Beijing Olympic Stadium will be under intense pressure from the world's top athletes.

Syngenta has been involved with the stadium's turf project for over a year, providing the complete disease protection programme for the 16,000m2 of turf, from March through to the end of the Games in August.

With the sheer size of the construction, the time available and, due to its unique design, the lack of light penetration into the stadium, it was impossible to grow grass inside the stadium. Instead, the turf has been produced on a modular, tray-based fully mobile cropping system. The turf has been grown in trays at a nursery 15km from Beijing, under conditions that identically replicate conditions in the stadium for irrigation, temperature and humidity.

It will take the turf installation team 12 to 15 hours to lay the 2m x 2m trays, using a grid system laid into the concrete stadium floor. Syngenta Turf Technical Manager for Asia Pacific, Dr Henk Smith, highlights that one of the major advantages of the system is that if any of the turf is physically damaged during an event, such as hammer throwing, for example, individual trays can be lifted and replaced to keep the playing surface in pristine condition.

"Our role has been to deliver a perfect playing surface at precisely the right time and that will provide the platform for the sporting performances. The heat and humidity within the stadium can be intense, and highly conducive to disease," reports Henk.
"We have developed a fully preventative programme, based on the fungicides Heritage, Banner Maxx and Daconil WeatherStik, to stop any fungal diseases in the turf during its growing season, and to prevent any outbreak of disease once the trays are laid into the Birds Nest."

The programme created has been based on experiences of Syngenta stadium disease management across Asia and Australia, as well as European management of the cool season turf, Poa pratensis, being used in the Olympic Stadium. The Smooth Meadow Grass, or Kentucky Bluegrass, has been specifically selected as an ideal athletics surface. In addition to the track and field events, The Birds Nest will also host the soccer finals.

And will Henk be watching the athletes sporting achievements? - "I just can't wait to see the surface really get put to the test when the Games begin," he says. "We are set for two weeks of the most incredible performances, but I guess at least one eye will be on the turf to make sure it is performing as well."