0 Synthetics bounce back from the winter blues 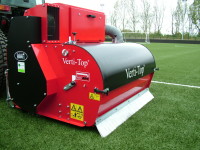 In many cases, there was no alternative in the worst of the weather but to divert play to synthetic surfaces, but as Charterhouse Turf Machinery's synthetic specialist Curtis Allen explains, this has put additional strain on these pitches, which have also been affected by the conditions.

"Very little thought is given to the effects the constant damp and increased traffic has on the synthetic surface," he comments. "This damp and the increased usage make the usual compaction and drainage issues escalate which means water pooling and contamination in the surface are more obvious."

When the UK became covered with a blanket of snow, many groundsmen's thoughts turned quickly to shovelling the white stuff off the synthetic pitches so that at least some valuable fixtures or training time could be salvaged.

But Curtis urges caution: "It is important snow is dealt with correctly and the right equipment is used to remove the snow if using the surface is unavoidable. Using the wrong methods or treatments on the surface in the winter months will only add to the summer cleaning tasks and risk damaging the carpet."

When the spring and summer months arrive and the surface starts to dry, this is the first chance that groundsmen will have to start really cleaning the infill. 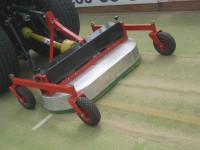 "The chances are the surface will not have been cleaned properly since the previous summer and two of the hardest months will have passed since," says Curtis.

"The infill will benefit from a deep clean to remove all of the debris and contamination which will have been pushed or washed into the carpet. The fact that the surface will be now dry means dust and lighter particles can be more effectively removed from the surface."

"We have many customers whom have had very good results with a de-compactor unit such as the X-treme Clean or Verti - Groom. The X-treme Clean is a horizontal rotary unit designed to break the surface open and then bring the infill out for cleaning, removal or just de-compaction. This machine is particularly effective on sand-based surfaces where compaction is more common due to the nature of the materials."

For more regular de-compaction the Verti - Groom is a favoured tool. "This machine comprises a tine section for de-compaction and a trailed brush unit to stimulate the infill and stand the fibres of the carpet up, says Curtis. "Once the surface has been prepped, the Verti - Top, Verti -Air, Verti - Brush or Eliminator can be used." 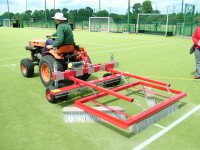 nfill in the surface may also be cleaned with the Verti-Air, a machine which uses a combination of sweeping and vacuum to lift all of the infill out and clean it with Heppa filters before returning it into the surface. "While this is a slow process it is very effective," comments Curtis.

The Verti - Brush can be used to work the infill back into the surface if it is not dirty or contaminated but is just compacted.

Alternatively if the infill is starting to break down or is heavily contaminated through a lack of maintenance, it may be necessary to replace some of the material, as Curtis explains. "The Eliminator is capable of extracting all of the infill or alternatively to a set depth."

"Whatever the cause or problem with a synthetic surface, Charterhouse has the machines to rectify the problems and return the surface to its correct condition. And if you escape the blanket of snow we have a number of machines which can be used in the winter months to keep the infill mobile, the surface open, sweep the debris off the surface and prevent it breaking down in the carpet. This maintains the pitch in good condition over a busy season and puts the groundsman one step ahead coming into the spring."