0 T&A urges Council and coal chiefs to say what is being done to ensure the safety of the public after 45ft-deep hole opens in Harold Park, Low Moor, Bradford

Council bosses have admitted it is "not practical" to predict where mining shafts could open up after a 45ft-deep hole appeared in a Bradford park this week. The admission came after the hole leading into a 19th Century mine shaft opened up under a groundsman's mower as he rode over it while carrying out maintenance work in Harold Park, Low Moor. 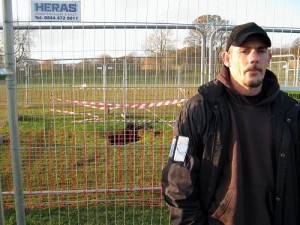 The groundsman was uninjured in the incident on Tuesday, but when the mower was moved, the 45ft deep and 9ft wide hole was revealed. Bradford Council and the Coal Authority have now both admitted there is little they can do to predict which areas may become dangerous.

Following concerns from the public, the Telegraph & Argus yesterday asked the Council:

In response, a Council spokesman said: "Any former mining area will have problems with periodic subsidence as the ground settles into former shafts and tunnels.

"However, it is not practically possible to predict where the subsidence will take place. All we can do as a local authority is constantly monitor the land we are responsible for and as soon as a problem occurs, react as swiftly as possible."

The T&A yesterday reported how Councillor Val Slater (Lab, Royds) said she expected the Coal Authority would be taking steps to identify any other hazards in the area and "dealing with them before any other unfortunate accident occurs".

For the full article from Telegraph & Argus click here.