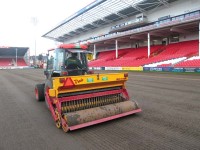 Gloucester Rugby Club are currently preparing for the new Guinness Premiership season. These preparations follow last season's successes in which they finished a well-deserved top.

Their success over recent seasons has been aided by having an excellent surface at Kingsholm where Gloucester have played their home games since 1891. The pitch is made from the natural land with a gravel layer over clinker, there is no artificial drainage system or rootzone. The natural soil, which was placed over the gravel layer, is silty loam.

At the end of last season Dave Balmer, Stadium Manager and Head Groundsman, called in Simon Hutton from Fineturf to carry out the end of season renovation.

The pitch received considerable wear during last season from the first and second team games, plus hosting the EDF Challe 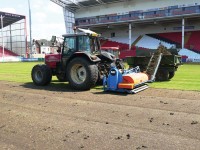 nge Cup Final and also the Ireland against Barbarians game.

To this prestigious list one then has to add the punishment from the regular training sessions which are such an important part of today's game. The pitch came through the season very well but, as Dave is always striving to improve the surface, he was keen to make sure the renovations went well.

The work on the pitch didn't start until the end of May and, therefore, such a short close season increased the pressure on Dave to produce a quality sward.
The first job to tackle was the installation of two 80mm lateral drains up one wing. The surface was then fraise mowed with a Blec Combinator and any remaining debris was removed with a Trilo Vac. 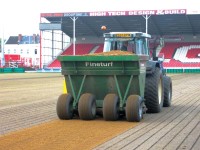 cation of sand is a fundamental operation in any pitch renovation project, and here Simon takes up the story.

"We supplied and applied 90 tonnes of Leighton Buzzard sand and then Earthquaked the pitch. After this we sowed MM60 at 70gm per square metre in four directions.

This particular mixture is based around a top quality formulation and its performance is now legendary, having been used in a number of major reseeding programmes at 'household-name' venues throughout the UK."

Simon explained that Scotts 8:12:8 pre-seeder fertiliser was then applied at 50gm per square metre.

"We also left Dave 80 bags of Sheppy 14:6:8 growing in fertiliser for him to apply weekly following the germination of the grass seed as part of his after maintenance programme.".

It was important to get quick, strong germination and establishment from his overseeding. The seed germinated within five days of sowing and there is no doubt that this is partly down to the use of the Headstart seed treatment which is applied to th 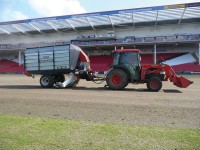 "The beauty of Headstart is that it is a safe, user-friendly product which actually 'does what it says on the tin!' In an ideal situation you can get, on average, an extra 20% of grass plants. When the conditions are less than favourable that percentage can be as high as 70% more germinated plants. For companies like ours this is very important because at the end of the day we will be judged by how well the grass has germinated and established."

With the Headstart treated grass romping away it is not surprising that Dave soon had to cut the pitch daily to keep on top of the new growth. The pitch was looking superb for the pre season friendly matches which started in mid August.

Fineturf are based in Grantham