This season's wet summer - for the second consecutive year - has been highly conducive to the disease. Areas which had seen occasional signs of light attack are now under extreme pressure; turf which had never experienced the problem in the past has seen the level of damage increase dramatically.

With Take-All breaking out this season in areas turf managers may not normally associate with the disease, including long-established fairways and greens, there is a risk that misdiagnosis may lead to fungicide applications that will have no effect, according to Syngenta Technical Manager, Simon Barnaby. Heritage is the only fungicide approved for the control of Take-All and Fairy Ring.

"Early mild symptoms of slight reddening or bronzing of the leaf typically fade in the autumn, with turf managers believing they have cured the problem. But the disease will be building up in the soil and, unless treated, could attack with vengeance next season," he warns. 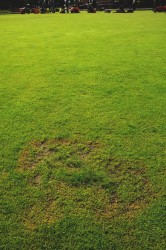 As the disease builds up, patches of dead turf will increase, from a few centimetres up to a metre or more in diameter. In many instances this season Take-All has taken out the more susceptible Bent grass constituent of the sward, leaving tufts of Fescue and opening space for the invasion of Poa annua and other weeds. In severely affected patches extensive areas of turf have been completely lost.

"Intensive renovation will be required to repair the damage, but the soil-borne Take-All pathogen will remain and demand treatment if the patches are not to reappear and spread," advises Mr Barnaby.

He adds that turf is more susceptible to Take-All if there is a high pH - over 7 - and if the rootzone is sandy. Trace element deficiency, especially Manganese, will also increase the risk of damaging disease attacks.

Making two applications of Heritage in the spring and early summer, as part of the fungicide programme, is the only recommended route for Take-All control. Applications should be made at a high water volume of up to 1000l/ha, to ensure good penetration of spray to the plant base and soil surface.

The systemic movement of Heritage will also ensure translocation of the fungicide up into the plant, to provide highly effective control of a broad spectrum of other summer turf diseases, including Anthracnose, Brown Patch and Fusarium, which has also flourished in the high humidity conditions that have encouraged Take-All this season.