0 Taking care of the grass roots... 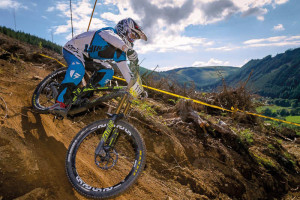 After finishing my degree in Sport and Exercise sciences, I knew that I wanted to develop my skillset from a business point of view, so when the opportunity to work for Pitchcare as a sales coordinator came about, I didn't hesitate to join.

I have grown up with a keen interest in sport. I compete in downhill mountain biking which presents me with opportunities to travel all over the country. In 2012, I competed in my first World Cup which was an amazing experience. Having 17,000 people cheering you on as you approach the finish arena made it a really special occasion, and one I am aiming to repeat.

During secondary school, I played rugby and was heading for a County trial until I ruptured the anterior cruciate ligament in my knee; love football (not mentioning who I support due to our recent form) and play golf on a few social occasions so, to sum up, I love sport.

I met the magazine editor, Laurence (Loz) Gale, within my first week and it wasn't long before we got on to the subject of sport and the turfcare industry. I explained to Loz how I was shocked by the fact that the recognition and publicity that groundstaff and greenkeepers deserve just isn't there. I went on to say that, without the efforts of these people, I don't think that sport in general would be where it is today. Realistically, I was only stating the obvious.

Loz suggested I read an article previously in the magazine by James Mead (Grounds Manager at Rugby School). In essence, the article emphasised that the contribution towards sport and health in schools by groundstaff should not be underestimated.

I am reminded of a conversation one of my mum's friends and I had which summarises what the article was about. She was saying how restless the kids had been when they got home during the first week back to school in September. I presumed that they were just excited to be back at school.

It turned out that the children couldn't get on the playing field because the grass hadn't been cut since they broke up in July, so it was too long and unsafe to go on.

It is as simple and obvious as that; no maintenance, even cutting grass on a school playing field, then no sport. Yet, one of those children could have the talent and potential to become a professional athlete and the talent is not being nourished or developed because of something so simple.

One of the modules I studied as part of my degree was Children and Sport in PE. The emphasis was on how physical education in schools has changed over the last few decades. In a nutshell, the main aspect that has changed to PE is that there is less of it and it has been pushed to the bottom of the pile in a sense. From the early 1900's there used to be at least two hours of physical activity in schools each day. I did some work experience at a local school about two years ago and, looking at the timetable, there was just two hours allocated for PE per class each week. On the surface I thought that's not too bad, it's better than nothing. In reality though, for a one hour lesson, fifteen minutes are spent getting changed and ready at the start and end of each lesson, five minutes warming up and cooling down, and another five minutes explaining what the aim is, which leaves fifteen minutes of actual activity.

I am digressing a bit, but from this point of view it is understandable why the maintenance of pitches in schools, typically with a tight budget, comes in a bit further down the list. I am not saying that PE in every school is 'rubbish', this is just one example from what I observed. It may be that the subject in recent has been a little bit confused, resulting in these cuts.

Essentially, what is PE? Should it be running laps of fields and doing jumping jacks, which covers the physical part, or should it be meaningful practice by practicing skills that are relative to leading a healthy lifestyle, such as how to throw a ball? Many teachers quiver at the thought of having to teach PE - how they will get everyone involved, do they have the equipment? As a result, it quite often ends up that the lesson is just a game. Which is great in one sense, there is movement, which means they are active, so they must be learning.

However, is anything actually being achieved or learned from this structure? Very little, I imagine.

The potential value of PE in comparison to other lessons is huge. Look at the transferable skills that can be developed; communication, team work, leadership, increased self-esteem, and that's just listing a few. All are skills that are used in everyday life; how can they be taught in fifteen minute blocks? On this basis, is it any wonder that obesity is one of the biggest health related problems facing children to date?

When diving into the stats and figures of this problem, it is truly astonishing. Nearly a third of children aged 2-15 are obese, 64% of the nation are overweight or obese and the direct cost of obesity to the UK economy is estimated at £15.8 billion per year. Imagine what that sum of money could do in terms of being pro-active and preventing obesity before it affects children around this age.

Maybe some of the money could have covered the costs of mowing the playing field and pitch I mentioned earlier on?

I revert back my conversation with Loz, we discussed the negative effects of bad playing fields and pitches have on sporting institutes, the development of children in relation to sport and promoting a healthy lifestyle. I think the effect groundstaff have in relation to this topic is vastly underestimated and that the turfcare industry can be part of the solution by providing quality sports surfaces.

Unfortunately though, the opportunity is being missed due to a lack of funding and backing. We hear time and time again that grassroots football is in demise, as an example. Is it any surprise, given that, in 2013, funding in general was cut from £60 million to £34m, which includes Government funding? What was that motto we all heard in 2012 at the Olympic Games again; "inspire a generation?"

Creating and maintaining surfaces and facilities to a good standard will encourage children to participate and be more active. Imagine how good it would feel as a kid to step onto a sports pitch, whether it be football, rugby, cricket, and feeling positive about the surface you are about to play on. In other words, not being put off by long grass, grass cuttings left on the pitch, puddles, bare pitches, uneven playing surfaces ... I could go on.

The biggest problem stopping this from happening though, as mentioned earlier, is funding. Groundstaff need more support from local authorities and schools so that they are an integral part of any sporting institute, such as the PE department in a school. A part of this solution is to help people gain a better understanding of what it takes to maintain the pitches they play on.

These efforts need to be publicised through the likes of social media, similar to the work Jamie Oliver has done, to help make this change happen. I hope that, in a few years time, the industry can clearly see a definitive change taking place, by literally taking care of the grass roots.