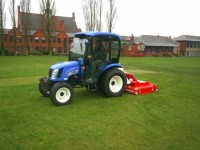 Extensive sports grounds are used both for school coaching and fixtures against local and national independent educational establishments and provide a busy workload for the three-strong groundstaff.

"We needed a bigger and more robust tractor for some new implements which we had sourced from Campey Turfcare, and they suggested looking at the New Holland range."

John and Richard took a trip to the nearby Kings School in Chester to look at their New Holland tractors before asking for a demonstration.

Campey Turfcare gave Hulme Grammar a couple of New Holland tractors on demonstration to help them select the right model, and they eventually opted for the TC31DA. "Campey's were fantastic, they couldn't do enough for us," comments John.

Powered by a 31hp three cylinder engine, the TC31DA has a lift capacity of 973kg to handle a wider range of implements, but remains light and nimble enough for delicate turf and restricted areas.

The tractor is used for 'just about everything' as John says. With pitches for football, cricket and hockey, it is kept busy all year round with a variety of attachments.

"The linkage is really well designed - it is so easy to swap implements around," he comments. "It is just a matter of fitting or removing a split pin. Previously there was the danger of wrecking the linkage as it was so stiff and fiddly. I also appreciate the way that the hydraulic lift can be altered in speed and is so sturdy. I have a lot of control when using attachments."

John has also noticed a big difference in the power offered by the TC31DA, and the tractor has been particularly useful preparing the cricket pitch for the season in less than ideal weather conditions.

"I slit, spike and top dress the cricket square using the tractor, and the beauty is that the SuperSteer system avoids turf scuffing."

Available as an option on New Holland's groundcare tractors, the SuperSteer axle can move across the front of the tractor on the same arc as the wheels, to an angle of 75deg without an excessive castor angle, giving a tighter turn. Working in conjunction with the Sensitrak four-wheel drive management system which automatically disengages four-wheel drive on a turn, SuperSteer minimises turf damage especially on tight runs such as at the end of a cricket pitch.

John adds: "The fact that the weight is so evenly distributed over the Nokian turf tyres means that there are hardly any imprints."

He also uses the tractor to spike, scarify and roll the outfield, along with the hockey and football pitches.

"I believe that we have moved into the 21st century with this tractor," John comments. "Along with state-of-the-art features such as SuperSteer, the main attractions are that it is so quiet, and the cab is really comfortable with good visibility and simple controls. New Holland has done an excellent design job and it is a pleasure to use."

The tractor has also found favour with other school staff, as John explains: "And the fact that the bursar was very pleased with the price is another major plus!"