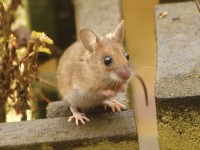 Mice hold a special affection with us humans due, in the main, to Walt Disney's Mickey and Minnie, MGM's Tom and Jerry and the cute Stuart Little (no, not the golfer). The pesky little critters pop up all over children's stories and are always portrayed as 'the good guys'.

However, the word mouse comes from Mus meaning thief. That is probably a more accurate description of them, as they are opportunist scavengers with the ability to explode in numbers given the right conditions - and your workshop or clubhouse are the perfect conditions!

The three most common species of mice in the UK are the house mouse (Mus musculus), the wood mouse (Apodemus sylvaticus) and the yellow necked mouse (Apodemus flavicollis). All three breed all year round.

The average litter size is six to ten and the kits are born between nineteen to twenty one days after gestation. Ten hours after giving birth the female is capable of becoming pregnant again! Kits will be weaned at three weeks old and become sexually mature at about two months.

If food is available, a female will have six to eight litters in a year, meaning that one female will be responsible for thousands of offspring each year!

Mice are considered nibblers, sampling at many foods within their environment, feeding up to twenty times in different places during a twenty four hour period. In that time a mouse will eat three grammes, not much individually, but tonnes can be spoiled.

The preferred diet, in most cases, is small seeds, however, in some areas, mice are showing a preference for higher protein diets such as kebabs, burgers and other fast food, causing difficulty in gaining control using the traditional methods.

Mice are generally nocturnal. Seeing mice in the daytime may indicate a large population is present. The average life span in the wild is one year.
As with all other rodents, mouse teeth continually grow and have to be kept to the optimum length and sharpness by gnawing. They will gnaw almost anything that is softer than their teeth.

f a mouse can get its head through a hole it will be able to get its body through - gaps as small as six millimetres will allow a mouse to get inside a building.

There are various methods of control. Anticoagulants are the most common, Difenacoum based baits are said to be the best to use for controlling mice. Don't get caught by the "non-toxic" baits, based on corn cob kernels, that you may have seen advertised as "safe pest control". The instructions say "remove all other food sources" and, bearing in mind that mice will eat anything, that usually means removing the contents of your clubhouse! You will simply be wasting your money.

Break back traps can be very successful if baited with chocolate spread or peanut butter. Always read the label on the bait tub if you choose to control mice yourself. Many are professional use only and, unless you have been suitably trained, you will be breaking the law if you use them.

Anticoagulant baits approved for use in the UK are for commensal rodents only. Commensal means "eats from man's table".

Wood mice and yellow necked mice will not be eating from man's table as these two are what are often called 'field mice'. Treating these in the outdoors would be an offence.

If you do choose to bait commensal rodents, make sure the baits are covered to ensure non-target species such as dogs, cats etc. cannot get access to the baits. Mice outside should be trapped to prevent any predators that feed on mice being subject to secondary poisoning.

Sonic repellers. We give the same advice for mice, as we do for rats, when sonic devices are mentioned - we suggest that they are only any good for throwing at rodents!

A recent job we were called to was to a company where 'a mouse' had been seen in a store room, and a small amount of damage had been found by the staff. Over five days we trapped ninety six house mice - unbeknown to the business owner, the mice were living in the suspended ceiling of his warehouse! So, when trapping mice, we put traps at all levels, including up high and in loft spaces.

The house mouse does not have to drink a drop of water in its entire life - they gain enough moisture from the food they eat.

Mice stay within their home range, usually not more than 10 metres from the harbourage.

A load of poo!

One mouse averages 36,000 droppings per year, approximately seventy every twenty-four hours. The dropping are cylindrical and about 5mm long. The droppings of all three species are similar. If you find lots of droppings in a loft, shed, barn or any other dark, quiet space, roll them between your finger and thumb. If it is crumbly, you have found a bat colony, so get out quick as they are totally protected! If they are soft and smooth, wash your hands, you have found a mouse infestation.

Mice have no fear of new things. They will begin to feed on your bait, or try the attractant on your traps, the first night they are put out. You should check baits and traps every day when they are set.

As professional pest controllers, where possible, we avoid using glue boards. They have to be checked at least every twelve hours and are unbelievably inhumane.

Be sure you have identified the species of mouse that is causing you problems and, where possible, only bait inside - don't get caught the wrong side of law.

Don't forget, you can always ask for advice on pest control.